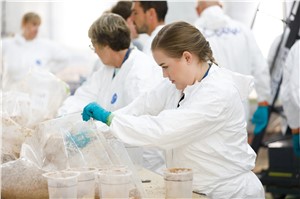 The capsule will protect the spacecraft through its landing sequence on Mars when it hits the atmosphere with extreme speed and force that generate thousands of degrees of heat.

"We are excited to partner with JPL again to design, fabricate and test an aeroshell for a Mars mission,” said David Buecher, Lockheed Martin program manager for the Mars Sample Retrieval Lander aeroshell. “By protecting this next spacecraft during its descent to Mars, we’re delighted to have a role in the safe delivery of another element of the Mars Sample Return program.”

Bringing Home a Piece of Mars
The Mars Sample Retrieval lander is the next big step in NASA’s visionary Mars Sample Return campaign. The lander will retrieve samples of Martian soil taken by the Perseverance Rover, which landed on the Red Planet in February 2021. An ascent vehicle brought by the lander will then launch those samples into Martian orbit to rendezvous with a European Space Agency orbiter for their trip to Earth in the early 2030s.

With the specifics of the sample retrieval lander still being finalized, the aeroshell team will draw from its abundant deep space experience to meet any unique mission needs. Lockheed Martin has designed and built aeroshells for 10 previous NASA Mars missions – including Perseverance – as well as sample return spacecraft like Stardust and Genesis.

Building a World Class Aeroshell
The aeroshell is comprised of a cone-shaped backshell and a disc-like heat shield that encapsulate the spacecraft. The protective structure keeps the spacecraft safe during the months-long, frigid cruise in deep space, slows its speed upon arrival and protects it from intense heat during the complex landing sequence and touchdown on Mars.

The heat shield bears the brunt of the extreme temperatures created when the spacecraft hits Mars’ atmosphere at high speeds. Made of a durable thermal protective material called Phenolic Impregnated Carbon Ablator (PICA) – designed at NASA’s Ames Research Center – it absorbs the heat and keeps the spacecraft cool in temperatures that can reach 5,000 degrees Fahrenheit.

The backshell is hand-packed with another special thermal protection material called SLA-561v, seen above. Invented by Lockheed Martin for the first-ever Mars landers in the 1970s, this super lightweight ablator made of silicone and cork mitigates heat while also minimizing weight.

Lockheed Martin has been involved in all 22 NASA missions to Mars and has partnered with the agency to explore every planet in our solar system. In the future, the team looks forward to continuing that legacy with this next Mars aeroshell, supporting the first ever sample return mission from a planet.