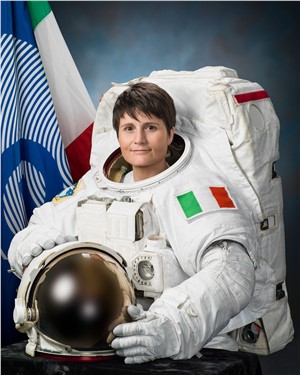 ESA astronaut Samantha Cristoforetti is expected to serve as International Space Station commander for Expedition 68a, following an in-principle agreement by international partners on 19 May, pending consolidation of the Space Station’s operational plans and launch dates.

As a member of Crew-4, Samantha will be launched with NASA astronauts Kjell Lindgren and Bob Hines to the Station from Florida, USA, on a SpaceX Crew Dragon spacecraft in 2022. This will be Samantha’s second space mission and the experience she brings will stand her in good stead as Europe’s first female in command of a Station expedition.

“Returning to the International Space Station to represent Europe is an honour in itself,” says Samantha. “I am humbled by my appointment to the position of commander and look forward to drawing on the experience I’ve gained in space and on Earth to lead a very capable team in orbit.”

ESA Director General Josef Aschbacher says, “Samantha’s nomination to the role of International Space Station commander is an inspiration to a whole generation currently applying to join ESA's astronaut corps. I cannot wait to meet the final candidates and I take this opportunity to once again encourage women to apply.”

Choosing a commander
Samantha will be ESA’s fifth International Space Station commander and the fourth from ESA’s astronaut class of 2009.

Decisions around crew assignment and the role each astronaut plays on Station are made in consensus by the Multilateral Crew Operations Panel (MCOP), comprising representatives from all five international partners: ESA, US space agency NASA, Russian space agency Roscosmos, Japan Aerospace Exploration Agency JAXA and the Canadian Space Agency CSA.

ESA astronaut Frank De Winne was the first European commander of the Space Station. He now represents ESA on the MCOP as Head of the European Astronaut Centre and says Samantha’s appointment demonstrates the value placed on ESA astronauts by its international partners.

“Though overall control of the Station lies with flight directors on the ground, the Space Station commander works to foster team spirit amongst the astronauts and between ground and space crews, ensuring all crew members can perform at their best,” explains Frank.

“Samantha proved herself to be a highly competent and trusted leader during NASA’s NEEMO23 mission among other activities. Her experience and attitude make her an asset for ESA and our partners and I know she will serve us proudly during her time in space.”

A role model for new recruits
Samantha’s nomination comes at a significant moment for European nationals of all genders, as ESA issues a rare call for new astronauts. The deadline for applications to ESA’s astronaut selection has just been extended to 18 June 2021, to accommodate the addition of Lithuania as an ESA Associate Member.

Samantha joined the European astronaut corps during ESA’s last recruitment campaign in 2008/9 and ESA Director of Human and Robotic Exploration David Parker says her trajectory is an example of the opportunities available to applicants today.

“Samantha joined us just over a decade ago as a highly capable recruit. Now she is a veteran space flyer taking on a leading role.

“Like a number of our active astronauts, Samantha balances a demanding career with raising a family. She embraces both of these challenges with ESA’s strong support and has been an advocate for all those who might be considering a career as an astronaut to put themselves forward and apply.

“I am delighted to see Samantha’s skills, experience and hard work recognised through her appointment to International Space Station commander position. I have no doubt she will continue to inspire us to embrace challenge, maximise our abilities and further our knowledge in space or on Earth,” he says.