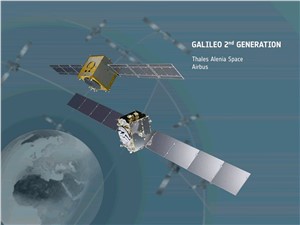 Acting on behalf of the European Commission, ESA has signed two contracts for an overall amount of €1.47 billion, to design and build the first batch of the second generation of Europe’s Galileo navigation satellites.

“Galileo is a major success for Europe, and these contracts ensure that it is going to be around for a long time to come,” comments Paul Verhoef, ESA Director of Navigation. “The Galileo Second Generation will represent a further step forward with the use of many innovative technologies to guarantee unprecedented precision, robustness and flexibility of the system for the benefit of users worldwide.”

Galileo is Europe’s civil global satellite navigation constellation, currently the world’s most precise satnav system, offering metre-scale accuracy to more than 2 billion users around the globe. With improved accuracy, the new generation should be able to offer decimetre-scale precision positioning to all.

These Galileo Second Generation (G2) satellites will revolutionise the Galileo fleet, joining the 26 first generation Galileo satellites in orbit today plus the 12 ‘Batch 3’ satellites currently in production and testing. The first launch of these Batch 3 satellites will take place later this year.

The new G2 satellites will be constructed in a short time scale with their first launch expected in less than four years, allowing them to commence operations in space as soon as possible.

The G2 satellites will gradually join the existing constellation, but will be much larger than existing satellites. Using electric propulsion for the first time, and hosting an enhanced navigation antenna, their fully digital payloads are being designed to be easily reconfigured in orbit, enabling them to actively respond to the evolving needs of users with novel signals and services.

New on-board technologies include electric propulsion to propel the satellites from the orbit in which they will be launched to the final operational orbits, allowing two satellites to be launched at once despite their increased mass. Inter-satellite links between the satellites will let them routinely cross-check their performance and reduce their dependency on the availability of ground installations.

Thanks to G2, it will be possible for navigation devices such as smartphones to acquire the signal faster and access services more quickly upon switching on their devices, with lower power consumption. This will open up new perspectives for many new devices to offer positioning capabilities, a true revolution for emerging self-driving cars, autonomous drones and the whole ‘Internet of things’.

G2 will also offer enhanced services for search and rescue, including two-way communications to the person in trouble. And a new emergency communications capability will enable authorities to warn users in affected regions of imminent dangers such as tsunamis or earthquakes. Such warnings could be sent anywhere on Earth, independently of telecommunication providers, by using Galileo navigation signals as a one-way messaging service.

Overall, the G2 satellites will incorporate numerous technology upgrades, developed through EU and ESA research and development programmes. But the Galileo G2 system will result from a series of seamless upgrades and changes to the G1 system currently in place, without interruption to any of its services.

The Galileo system will be operated by the EU Agency for the Space Programme, EUSPA, based in Prague. ESA and EUSPA are partnering on the development and operations of Galileo.

ESA is in charge of the design, development, procurement, qualification of Galileo satellites and the associated ground infrastructure on behalf of the European Union, the system owner.