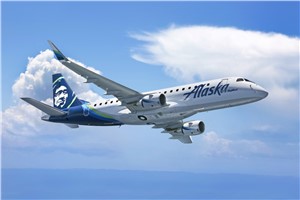 Embraer has agreed to the sale of eight new E175 jets to SkyWest, Inc. (NASDAQ: SKYW) for operation with Alaska Airlines, adding to the 32 SkyWest E175 jets SkyWest already flies for Alaska. The E175 aircraft will fly exclusively with Alaska Airlines under a Capacity Purchase Agreement (CPA). The value of the contract, which will be included in Embraer’s second-quarter backlog, is USD 399.2 million, based on list price.

Alaska Airlines, a new member of the oneworld Alliance, currently has 62 Embraer E175 jets in their fleet, operated by Horizon Air and SkyWest Airlines. The 76-seat aircraft will be delivered in Alaska’s livery and three-class configuration, starting in 2022.

President and CEO of SkyWest, Chip Childs, said, “With these aircraft, we will have over 220 E175s, operating more than any other carrier in the world. Our customers love the E175; and we have great confidence in and appreciate our long-standing partnership with Embraer for more than 35 years.”

“We have navigated through the pandemic and we’re on a solid path to recovery. The E175 remains a key part of our strategy,” said Nat Pieper, Alaska Airlines senior vice president of fleet, finance and alliances. “We’re excited about growth in the years ahead, which has always been at the heart of Alaska’s DNA. The E175 is a terrific plane to help us add new routes and frequencies, and to complement our mainline aircraft to meet fluctuating demand with the right capacity.”

Mark Neely, VP Sales and Marketing, The Americas, Embraer Commercial Aviation, said, “The E175 is truly the backbone of the North American regional market; Embraer’s market share in the region’s 70-90-seat segment is 85%. There are currently 588 E175s serving U.S. and Canadian carriers in cities across Canada, the USA, Mexico, and Central America.”

The E175 has been a lifeline for carriers as they are perfectly suited to rebuild frequencies and add incremental capacity to meet rebounding domestic demand. During 2020 it was the first aircraft type to bounce back, meeting 100% of Alaska’s 2019’s schedule by Nov. 2020. Last October, the E175 started complementing larger aircraft on several intra-Alaska routes to meet demand fluctuations. Alaska Airlines has also been building its presence in California with the addition of new seasonal routes between cities in the Golden State and Montana with the E175.