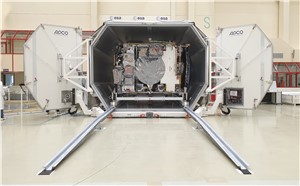 The Jupiter Icy Moons Explorer, Juice, has come ‘home’ to ESA’s technical centre in the Netherlands to undergo an extreme environment test in Europe’s largest thermal vacuum chamber to prepare for its journey to the outer Solar System.

The spacecraft arrived at ESTEC, ESA’s European Space Research and Technology Centre, from Airbus Friedrichshafen in Germany last week. It is now being unpacked and prepared to enter the ‘Large Space Simulator’ later this month. It will spend several weeks being subjected to extreme heating and cooling cycles under vacuum, to confirm the spacecraft is ready for its long journey through the Solar System to Jupiter.

Juice will remain at ESTEC until July, before being transported to Toulouse for its final round of tests. From there it will travel to Europe’s Spaceport in French Guiana, to be launched on an Ariane 5 rocket next year.

Once in the Jovian system the mission will make detailed observations of the giant gas planet and its three large ocean-bearing moons – Ganymede, Callisto and Europa – with a suite of remote sensing, geophysical and in situ instruments. The mission will investigate the emergence of habitable worlds around gas giants and the Jupiter system as an archetype for the numerous giant exoplanets, now known to orbit other stars.