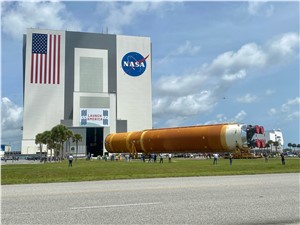 A Boeing-built [NYSE: BA] rocket core stage for NASA’s Space Launch System was unloaded from a barge today at the agency’s Kennedy Space Center and moved to the Vehicle Assembly Building.

The 212-foot (65-meter) core stage will be stacked with a Boeing/United Launch Alliance Interim Cryogenic Upper Stage, two solid rocket boosters, a Launch Vehicle Stage Adapter and the Orion spacecraft. Teams will prepare the SLS to launch Orion on an uncrewed mission around the moon and back called Artemis I.

The first in a series of increasingly complex missions, Artemis I will test the Orion spacecraft and SLS rocket as an integrated system ahead of crewed flights to the moon for sustained exploration. SLS is the only rocket that can send Orion, astronauts and cargo to the moon in a single mission.

Boeing is the prime contractor to NASA for the SLS core and upper stages and avionics. The company is joining major elements for the Artemis II core stage now at NASA’s Michoud Assembly Facility in New Orleans, while manufacturing core stage elements for Artemis III. The company also is working on evolvable capabilities for the rocket system such as the Exploration Upper Stage, which is entering production at Michoud.