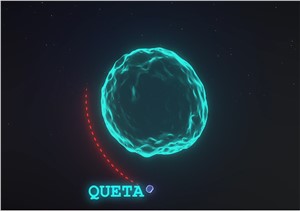 On Jan. 9, 2020, NASA’s Lucy mission officially announced that it would be visiting not seven, but eight asteroids. As it turns out, Eurybates, one of the asteroids along Lucy’s path, has a small satellite.

Though searching for satellites is one of the mission’s central goals, finding these tiny worlds before Lucy is launched gives the team the opportunity to investigate their orbits and plan for more detailed follow-up observations with the spacecraft. Without searching for these asteroid companions before launch, Lucy could also run the risk of encountering an unexpected binary pair. Seeing two asteroids when the spacecraft is expecting only one could confuse its autonomous tracking system.

Fortunately, the Lucy science team is already familiar with the perfect tool to use. “One of the ways that you can try to look for satellites is to use Hubble. And that’s something that I’ve done a lot with the Kuiper Belt,” says Keith Noll, the mission’s project scientist at NASA’s Goddard Space Flight Center in Greenbelt, Maryland, and one of the discoverers of Eurybates’ satellite. “We know more than 100 binaries in the Kuiper Belt, and the vast majority of those were found with Hubble.”

And understandably so. The orbiting telescope, 13.3 meters (43.5 feet) long, which has a primary mirror with a diameter of 2.4 meters (7 feet, 10.5 inches), is unencumbered by the normal blurring effects of Earth’s atmosphere, since it resides comfortably above the atmosphere. Though some of the larger earthbound telescopes are sometimes able to observe the heavens with similar clarity, Hubble can detect a small, dim satellite orbiting very close to a larger, brighter asteroid that a telescope on Earth might miss.

To know where to look for satellites, the science team had to calculate the Hill spheres of the asteroids they wanted to examine. The Hill sphere is an imaginary sphere around a body, inside of which the body has the dominant gravitational influence. In other words, all stable satellites of a body orbit within its Hill sphere. Earth’s Hill sphere, for instance, has a radius of nearly 1.5 million km (930,000 miles), and the Moon orbits safely inside at approximately 380,000 km (236,000 miles).

Noll’s team submitted a proposal to use Hubble to search for satellites and made their first round of observations in the fall of 2018. They then scoured the images for evidence of satellites. This process is difficult, since raw images from Hubble can be messy. “It’s got a lot of bumps and blobs, it’s not a clean thing,” remarks Noll. For instance, raw images of bright objects often show diffraction spikes, the bright X-shapes that resemble cartoon four-pointed stars. Hubble’s cameras are also susceptible to cosmic rays (particles traveling at close to the speed of light) which can appear as bright dots on the images. “So when you look at [the images], you say, ‘Well, is that blob a satellite, or is it just part of… the way that the light gets scattered from the entire optical assembly throughout the telescope?’” Except for a brief false alarm when it appeared that another Lucy target, Orus, might be a binary, the team saw no new evidence of satellites.

That is, until November 2019. The night before a large science team meeting, Noll was preparing a presentation on searching for satellites. In looking for photos to demonstrate the difficulties of distinguishing between satellites and other bright blobs, he came across one of his team’s Hubble photos from Sept. 12, 2018. After experimenting with the brightness and contrast, he saw one peculiar bright spot near Eurybates. “I said, ‘Gosh, that one really looks like what I would expect a satellite to look like.’” Realizing it was getting late, he circled the object and finished making the presentation. In his talk the next day, he pointed out the object’s striking resemblance to a satellite. In the audience was Mike Brown, one of the mission’s science co-investigators. Brown interrupted to ask Noll if he had looked at the data from the other observation on Sept. 14, but Noll admitted that he had not had a chance yet. According to Noll, before he finished presenting, Brown examined the data from Sept. 14 and exclaimed, “I see it there too!”

Everyone crowded around Brown’s laptop. Had they actually discovered a satellite of Eurybates? The team noticed that as they compared the two photos, the object appeared to have moved a little, like a satellite might. A check revealed that the object’s observed positions fit many possible orbits. From a planetary dynamics perspective, it also made sense that Eurybates might have a satellite. Eurybates is one of a massive set of fragments created by the same asteroid collision, so the idea that one of these fragments might be orbiting Eurybates is not far-fetched. These were all steps in the right direction, but not conclusive evidence. The team had only two observations so far, and according to Noll, “You never really believe anything until you’ve seen it the third time, so we had to get more data.” They submitted an urgent proposal to use Hubble again, which was approved quickly enough that the team was able to get their observations about a month later. They requested 12 chances to observe the satellite, but they were granted three. If they could see the satellite again on at least one of the three, they would be given the other nine.

Their first chance was on Dec. 11. The satellite was a no-show. The team wasn’t worried – yet – because they knew there was a good chance that it might be simply too close to Eurybates, and lost in the glare. They tried a second time on Dec. 21, but much to their consternation, the shy little rock was nowhere to be found. The team began to doubt that their so-called satellite even existed. “Maybe we’re just kidding ourselves. Maybe it’s not real,” Noll remembers thinking.

Finally, on Jan. 3, they found it. The tiny, dim satellite was clearly visible on the new images. As they’d suspected, in the previous two observations it was too close to Eurybates (which is over 6,000 times brighter than its companion) to be seen. The difference in brightness suggests that the satellite is probably less than 1 km (0.6 miles) in diameter, puny compared to Eurybates (64 km, or 40 miles).

Queta is the first Trojan asteroid named under a newly revised naming convention for Trojan asteroids. Though the Trojans were previously only named for heroes from Homer’s Iliad, smaller Trojans are now named after Olympic and Paralympic athletes, in recognition of these modern day heroes. Queta is named in honor of Mexican track and field athlete Norma Enriqueta “Queta” Basilio Sotelo. At the 1968 Summer Olympics, she became the first woman in history to light the Olympic cauldron. The name “Queta” was selected for Eurybates’ satellite because Basilio’s role is similar to that of Eurybates, a Greek herald. In ancient Greece, heralds were messengers in the service of kings or governments, an occupation that sometimes involved running long distances. According to the ancient Greek historian Herodotus, a herald named Pheidippides ran 260 km (160 mi) from Athens to Sparta to request the Spartans’ aid in the Battle of Marathon. (It is from this legend that we get the word “marathon.”) Heralds were also tasked with announcing the start of the ancient Olympic Games, similar to how the torch ceremony announces the start of the modern Olympic Games. Though the torch ceremony was not a part of the ancient Olympics, it is inspired by an ancient Greek tradition called the lampadedromia, a relay race in which the runners pass a torch while trying to keep its sacred fire burning. Several other members of the Eurybates family, a group of asteroids that are actually fragments formed by the same collision, have been named after heroes of the 1968 Olympic and Paralympic Games. As a fellow trailblazer of the 1968 Games, Queta fits right in.