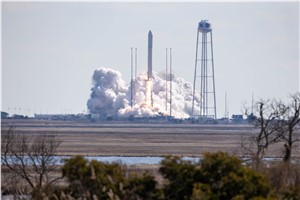 A Northrop Grumman Cygnus resupply spacecraft is en route to the International Space Station with approximately 8,000 pounds of science investigations and cargo after launching at 12:36 p.m. EST Saturday from NASA’s Wallops Flight Facility in Virginia. About three hours after launch, the spacecraft’s solar arrays successfully deployed to collect sunlight to power Cygnus on its journey to the space station.

NASA Television, the NASA app, and agency’s website will provide live coverage of the spacecraft’s approach and arrival beginning at 3 a.m. Monday, Feb. 22. Cygnus is scheduled to arrive at the space station around 4:40 a.m.

Northrop Grumman’s 15th cargo flight to the space station is the fourth under its Commercial Resupply Services 2 contract with NASA. Cygnus launched on an Antares 230+ rocket from the Virginia Mid-Atlantic Regional Spaceport’s Pad 0A at Wallops.

The resupply flight will support dozens of new and existing investigations. Included in the scientific investigations Cygnus is delivering to the space station are:

Using worms to learn about muscle loss
Tiny worms could help us determine the cause of muscle weakening that astronauts can experience in microgravity. Thanks to a new device for measuring the muscle strength of tiny C. elegans worms, researchers with the Micro-16 study can test whether decreased expression of muscle proteins is associated with this decreased strength. Results of this experiment may provide a better understanding of the links between gene expression and muscle strength, support the development of countermeasures to help maintain crew member health, and support new therapies to combat the effects of age-related muscle loss on Earth.

I dream of space
The ESA (European Space Agency) Dreams experiment will take a closer look at astronaut sleep. The investigation serves as a technology demonstration of the Dry-EEG Headband in microgravity, while also monitoring astronaut sleep quality during a long-duration flight mission. Raw data will be available to scientists for their analysis, while the crew also can input direct feedback on their sleep with a tablet application. Sleep is central to human health, so a better understanding of sleep in space provides a more comprehensive understanding of human health in microgravity.

A life support upgrade
The Environmental Control and Life Support System (ECLSS) is a system of regenerative life support hardware that provides clean air and water to the space station crew. The system will get an upgrade thanks to the Exploration ECLSS: Brine Processor System. This investigation demonstrates technology to recover additional water from the Urine Processor Assembly using a membrane distillation process. Long-duration crewed exploration missions require about 98% water recovery, and this technology demonstration in brine processing will help achieve this goal. This Brine Processor System plans to close the gap for the urine waste stream of the space station.

Testing the manufacturing of artificial retinas in microgravity
Millions of people on Earth suffer from retinal degenerative diseases. Artificial retinas or retinal implants may provide a way to restore meaningful vision for those affected. In 2018, startup LambdaVision sent its first experiment to the space station to determine if the process used to create artificial retinal implants by forming a thin film one layer at a time may work better in microgravity. LambdaVision’s second experiment evaluates a manufacturing system using a light-activated protein that replaces the function of damaged cells in the eye. This information could help LambdaVision uncover whether microgravity could optimize production of these retinas and assist people back on Earth.

Preparing for the Moon
The International Space Station serves as a testing ground for technologies we plan to use on future missions to the Moon. The A-HoSS investigation puts tools for the crewed Artemis II mission to the test. Built as the primary radiation detection system for the Orion spacecraft, the Hybrid Electronic Radiation Assessor (HERA) was modified for operation on the space station. By verifying that HERA can operate without error for 30 days, it validates the system for crewed Artemis mission operations.

High-performance computing aboard the space station
Improved high-performance computing will be required for space missions as humans prepare for additional exploration throughout the solar system. Currently, computing capabilities in space are reduced compared to capabilities on the ground because they prioritize reliability over performance, creating challenges when transmitting data to and from space. Launched in 2017, the Spaceborne computer study ran a high-performance commercial off-the-shelf computer system in space, successfully performing more than 1 trillion calculations (or one teraflop) per second for 207 days without requiring reset. Now launching on Northrop Grumman’s CRS-15 mission, Spaceborne Computer-2 explores how commercial off-the-shelf computer systems can advance space exploration by reliably processing data significantly faster in space, speeding scientists’ time to data access and analysis from months to minutes.

These are just a subset of the hundreds of investigations currently being conducted aboard the orbiting laboratory in the areas of biology and biotechnology, physical sciences, and Earth and space science. Advances in these areas will help keep astronauts healthy during long-duration space travel and demonstrate technologies for future human and robotic exploration missions as part of NASA’s Moon and Mars exploration approach, including lunar missions through NASA’s Artemis program.

The lead NASA flight director for the mission is Adi Boulos. “I am humbled to be the International Space Station Flight Director for the Northrup Grumman CRS-15 mission,” Boulos said. “This spacecraft has the honor of being named the S.S. Katherine Johnson. As a Black woman, Katherine Johnson shattered race and gender barriers to live out her dreams and become a pivotal part of this country’s young space program. Fifty-nine years ago today, astronaut John Glenn became the first American to orbit Earth after personally asking for Katherine Johnson to verify his Mercury missions’ orbital trajectory calculations. Katherine Johnson was an asset to our space program, and I am honored to work for a mission that expands her legacy even further.”

The Cygnus spacecraft will remain at the space station until May before it disposes of several thousand pounds of trash through its destructive re-entry into Earth’s atmosphere.