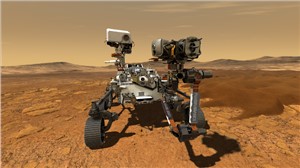 “Our longstanding support of NASA’s Mars Rover missions has provided vital components for these vehicles for many years,” said Lindsay McEwen, vice president, navigation and positioning systems, Northrop Grumman. “The LN-200S brings critical navigation capabilities to the Perseverance Rover, and delivers top reliability that has helped to extend previous Mars Rover missions for years beyond their expected length.”

The Perseverance Rover mission will last at least one Mars year, or about 687 Earth days. It will study the habitability of Mars and will specifically seek biosignatures of past life, collect core samples of the surface and test oxygen production in the atmosphere. Additionally, the Perseverance Rover will test technologies to aid in future human exploration.

Northrop Grumman solves the toughest problems in space, aeronautics, defense and cyberspace to meet the ever evolving needs of our customers worldwide. Our 97,000 employees define possible every day using science, technology and engineering to create and deliver advanced systems, products and services.