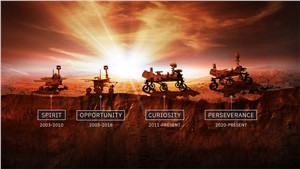 L3Harris Technologies’ (NYSE:LHX) avionics and communications technology will provide a critical link that enables NASA to control the Perseverance Rover when it lands on Mars and throughout its 10-year life expectancy.

“The rover will capture and transmit an unprecedented volume and the highest-quality images of the Mars surface via L3Harris’ transceivers to the overhead orbiters,” said Sean Stackley, President, Integrated Mission Systems, L3Harris. “This volume of transmission requires the significant bandwidth our transceivers provide, while adhering to stringent size, weight and energy constraints. Perseverance will operate in an extremely harsh environment for more than a decade, requiring our most hardened, durable and proven solutions. This is another great example of L3Harris driving innovation fast forward.”

L3Harris innovation has played a critical role in space initiatives for more than 60 years. The company has supported NASA’s Mars exploration for two decades – including the Spirit, Opportunity, Curiosity and Perseverance vehicles. Perseverance, the most sophisticated rover yet, launched seven months ago on United Launch Alliance’s two-stage Atlas V-541 launch vehicle for a mission expected to last one Martian year – about 687 Earth days.

L3Harris technology has been onboard numerous NASA programs – from early spacecraft and continuing through the Mercury, Gemini, Apollo, Space Shuttle, International Space Station and previous Mars missions. L3Harris has supported deep space exploration with work on the Hubble Space Telescope and now the James Webb and Roman space telescopes.  In addition, the company supports space-based weather forecasting on U.S. and international satellites and has navigation technology on every U.S. GPS satellite.