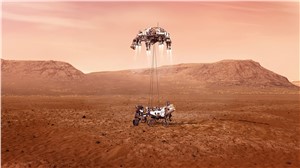 “Landing on Mars is hard. The planet has an atmosphere but it is too thin to slow the spacecraft down enough for a safe landing, and that is where Aerojet Rocketdyne propulsion comes in,” said Aerojet Rocketdyne CEO and President Eileen P. Drake. “Aerojet Rocketdyne’s innovative and reliable propulsion has been a part of every successful NASA mission to Mars since the Viking program in the 1970s.”

According to NASA, entry, descent and landing is the shortest and most intense phase of the mission. When Perseverance reaches the outermost portion of the Martian atmosphere, it will be traveling nearly 12,500 mph and, within seven minutes, must slow to zero so it can hover and the rover can be lowered to the surface by a sky crane.

Aerojet Rocketdyne propulsion is critical to this phase of the mission which is often referred to as the “seven minutes of terror.” Eight MR-107U thrusters will stabilize the spacecraft during its entry into the Martian atmosphere; and eight MR-80B throttling thrusters on the descent stage will continue to slow the spacecraft’s descent and enable the sky crane to hover as it lowers the rover onto the planet’s surface. Both the MR-80B and MR-107U thrusters are manufactured at the company’s facility in Redmond, Washington. Aerojet Rocketdyne subsidiary ARDÉ also provided two pressurized tanks on the descent stage.

Once the Perseverance rover is safely on the surface of Mars, it will begin preparations for its roughly two-year sample collection mission. Aerojet Rocketdyne provides the Multi-Mission Radioisotope Thermoelectric Generator (MMRTG) that will power the rover and its instruments throughout surface operations. The MMRTG is provided by Aerojet Rocketdyne in Los Angeles, California.