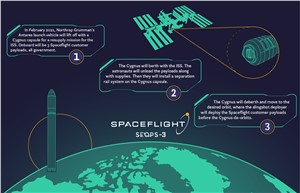 Spaceflight works with a wide range of launch providers to get our customer satellites on orbit, but the satellites onboard Northrop Grumman’s Antares rocket are one of our more unique deployments.

Our next launch of this kind is targeted for 12:36 p.m. EST, Saturday, February 20, from the Mid-Atlantic Regional Spaceport at NASA’s Wallops Flight Facility, as the Antares will be delivering a resupply capsule, the Cygnus, to the International Space Station (ISS).

On board the Cygnus will be three spacecraft belonging to Spaceflight customers, including Gunsmoke-J and two undisclosed U.S. government payloads. The Gunsmoke-J is a Joint Capability Technology Demonstration executed by the U.S. Army Space and Missile Defense Command, sponsored by both the Office of the Under Secretary of Defense (Research and Engineering) and the U.S. Army. This science and technology effort will demonstrate an entry-level capability in a 3U form factor relevant to Army warfighter needs and will also help inform future acquisition decisions.

Fun fact: Northrop Grumman names each of its Cygnus capsules after an individual who has played a pivotal role in human spaceflight. This particular capsule has been named for Katherine Johnson, NASA mathematician. Her hand-written calculations were critical for John Glenn’s successful orbital mission around the Earth.