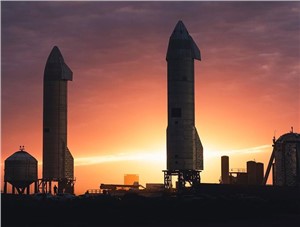 Similar to the high-altitude flight test of Starship serial number 8 (SN8), SN9 was powered through ascent by three Raptor engines, each shutting down in sequence prior to the vehicle reaching apogee – approximately 10 kilometers in altitude. SN9 successfully performed a propellant transition to the internal header tanks, which hold landing propellant, before reorienting itself for reentry and a controlled aerodynamic descent.

The Starship prototype descended under active aerodynamic control, accomplished by independent movement of two forward and two aft flaps on the vehicle. All four flaps are actuated by an onboard flight computer to control Starship’s attitude during flight and enable precise landing at the intended location. During the landing flip maneuver, one of the Raptor engines did not relight and caused SN9 to land at high speed and experience a RUD.

These test flights are all about improving our understanding and development of a fully reusable transportation system designed to carry both crew and cargo on long-duration, interplanetary flights and help humanity return to the Moon, and travel to Mars and beyond.

SpaceX’s Starship spacecraft and Super Heavy rocket (collectively referred to as Starship) represent a fully reusable transportation system designed to carry both crew and cargo to Earth orbit, the Moon, Mars and beyond. Starship will be the world’s most powerful launch vehicle ever developed, with the ability to carry in excess of 100 metric tonnes to Earth orbit.