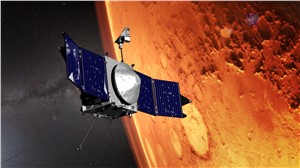 With a suite of new national and international spacecraft primed to explore the Red Planet after their arrival next month, NASA’s MAVEN mission is ready to provide support and continue its study of the Martian atmosphere.

Last year, in preparation for providing communications relay support, MAVEN reduced the highest altitude in its orbit using an aerobraking maneuver, a process taking advantage of the Martian upper atmosphere to place a small amount of drag on the spacecraft.  MAVEN also adjusted the orientation of its orbit, to better monitor data from Mars 2020 during its entry, descent and landing.

When not conducting relay communications, MAVEN will continue to study the structure and composition of the upper atmosphere of Mars. MAVEN has enough fuel to operate until at least 2030.