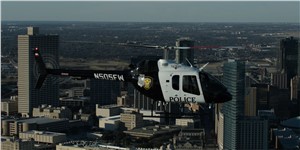 Bell Textron Inc., a Textron Inc. (NYSE:TXT) company, announced today the delivery of a Bell 505 to the Fort Worth Police Department. Bell executives and city officials celebrated this delivery at the police department’s hangar at Meacham Airport to mark a 70-year relationship between Bell and Fort Worth.

The Fort Worth Police Department currently operates two Bell 206 Jet Ranger aircraft; the addition of the Bell 505 will provide exceptional performance that is part of the Jet Ranger legacy.

“Bell is proud to continue the long legacy of supporting the Fort Worth Police Department and public safety initiatives in our growing community,” said Mitch Snyder, president and CEO. “Fort Worth has shaped Bell as a company since our move here in 1951, providing an environment accepting of new ideas and technology that remains vital to our future. We look forward to watching the Fort Worth PD and the Bell 505 serve the citizens of Fort Worth.”

“The City of Fort Worth and Bell have an incredible, long-standing partnership, and I am thrilled to see this continue to positively impact our community,” said Mayor Betsy Price. “Fort Worth Police Department’s new Bell 505 will be a great asset to the community as we continue to prioritize public safety for all residents using top of the line technology. The City looks forward to growing our partnership with Bell, as it is critical we support local businesses and uplift the innovative work being done in our own backyard.”

The Bell 505 was introduced in 2014 and certified by the Federal Aviation Administration (FAA) in 2017. There are now more than 300 Bell 505s operating in more than 55 countries on six continents, surpassing 50,000 total fleet flight hours. With a speed of 125 knots (232 km/h) and useful load of 1,500 pounds (680 kg), the Bell 505 is designed to be easy to fly while providing significant value to the operator and best-in-class cabin visibility. The customer-driven design of the aircraft places safety, performance and affordability at the forefront, blending proven systems with advanced technology and a sleek, modern design.

Tell a friend:
Bell and the City of Fort Worth Celebrate Bell 505 Delivery and 70-Year Legacy