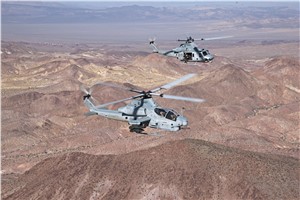 Heading up a military force during a mission requires a powerful team equipped to manage demanding environments. For the U.S. Marine Corps, this team is the Bell UH-1Y and AH-1Z aircraft, which share 85 percent commonality between the two platforms. Known collectively as the H-1 fleet, this duo is specifically designed and produced for expeditionary military operations. Together they provide the most capable attack and utility helicopters in service anywhere in the world today, across the full spectrum of military operations. They have high reliability in harsh environments that Marines often experience in these austere operations and are easily maintained with a small maintenance team, minimal support equipment and small parts pack-up.

The ease of these aircraft to reach inaccessible areas also plays into their ability to navigate challenging conditions. In a report on SLDinfo.com, author Robbin Laird remarks on how seamlessly the Bell AH-1Z Viper can touch down. “[The Viper] is very capable because of its relatively small footprint, able to land in a variety of ground or ship settings and get refueled,” says Laird. “If one focuses on the ability to operate virtually in any expeditionary setting, at sea or on land, the Viper is extremely capable of refueling for an insertion force. They can do this onboard virtually any fleet asset at sea or at a Forward Air Refueling Point or FARP.”

Bell Director of Global Military Sales and Strategy Joel Best reinforces that the H-1 platforms are optimized for austere operations. “The Marines operate in every single climatic environment, and the aircraft that Bell builds for them is built with this demand in mind,” says Best in an interview with Defence and Security Systems International. “Our aircraft operate in the extreme heat of the desert, and in the snow and ice of the mountains of Afghanistan. These aircraft are built to support the warfighter in any environment.”

These proven platforms have handled strike coordination and reconnaissance, tactical recovery of aircraft and personnel, aerial escort and more. As the Marines conduct close air support training exercises and missions in austere environments, the Marines continue to show how effortlessly both the Bell AH-1Z and UH-1Y works in tandem to overcome every challenge.