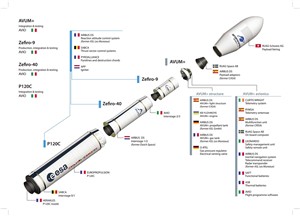 The solid rocket motors built for Vega-C under contract to Avio have all completed the hot fire tests to qualify them for flight.

The first stage P120C, second stage Zefiro-40 and the third stage Zefiro-9 are all fueled by solid propellant. These motors, together with the AVUM+ liquid propulsion upper module, will allow Vega-C to lift payloads of up to 2300 kg to a reference 700 km altitude in polar orbit.

The P120C first stage will burn for 130 s using 142 t of fuel to deliver a liftoff thrust of about 4500 kN. This will take Vega-C to an altitude of about 60 km in the first phase of flight before the second stage takes over.

Europropulsion, owned jointly by Avio and ArianeGroup, built three P120C models for test. One development and two qualification models have all been static fired successfully at Europe’s Spaceport.

The Zefiro-40, developed and manufactured by Avio in their Colleferro factory in Italy, was static fired on 8 March 2018 and then again on 10 May 2019 at test facilities in Sardinia.

During a burn time of 92 seconds the Zefiro-40 generates an average thrust of 1300 kN which is four times greater than that of an engine of a modern passenger aircraft. This propels Vega-C to an altitude of about 123 km.

The Zefiro-9 will power Vega-C’s third stage. It is an advanced version with a new igniter with respect to the one used on the Vega launch vehicle currently operating at Europe’s Spaceport.

On 1 October, the Zefiro-9 seated on the test bench in Cagliari, Sardinia performed its final qualification hot firing. It burned for 120 s using 10 t of solid propellant. The Zefiro-9 will take Vega-C to an altitude of about 190km.

“Industry is working very hard and very closely with ESA to complete the end of the qualification programme for Vega-C. Together we are overcoming the obstacles caused by the COVID-19 pandemic and we are committed to complete all activities planned for the preparation of the Vega-C maiden flight,” commented Giorgio Tumino, Head of Vega-C development and Chief Technical Advisor for Space Transportation at ESA.