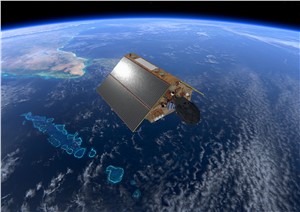 With less than a month to go before a SpaceX Falcon 9 takes Copernicus Sentinel-6 Michael Freilich into orbit to chart sea-level rise, preparations are forging ahead at the launch site.

Since the satellite arrived at Vandenberg in California on 24 September, it has been transferred to the SpaceX Payload Processing Facility, unpacked and undergone a series of tests to make sure that nothing had been damaged during transportation and the satellite is ready for the rigours of liftoff and its five-plus years in orbit around Earth.

Tasks still to tick off the ‘to do’ list before Sentinel-6’s 10 November launch date include the hazardous job of fuelling the satellite, as well as encapsulating it in the rocket fairing and rolling it out to the launch pad.

Once safely in orbit, Copernicus Sentinel-6 will continue the long-term record of reference sea-surface height measurements that were started in 1992 by the French–US Topex Poseidon satellite and then by the Jason series of satellite missions.

Since sea-level rise is a key indicator of climate change, accurately monitoring the changing height of the sea surface over decades is essential for climate science, for policy-making and, ultimately, for protecting those in low-lying regions at risk.

Satellites tracking the changing height of the ocean surface show that global mean sea level has risen, on average, by just over 3 mm every year since 1993. Even more worryingly, this rate of rise has increased in recent years. The role of Copernicus Sentinel-6 is not only to continue this critical ‘gold standard’ record for climate studies, but also to measure sea-surface height with greater precision than before.

To do this, Sentinel-6 brings, for the first time, synthetic aperture radar into the altimetry reference mission time series. To ensure that no bias is introduced into the time series data, the radar instrument delivers simultaneous conventional low-resolution mode measurements as well as the improved performance of synthetic aperture radar processing that yields high-resolution along-track measurements.

ESA’s Director of Earth Observation Programmes, Josef Aschbacher, said, “Sea-level rise is a major global concern so having a continuous precise record of change is critical for policy-making. We are extremely proud to be part of this important mission, which is truly international and epitomises the value of cooperation between the different organisations of ESA, the EC, EUMETSAT, NASA, NOAA and CNES.”

At a NASA press conference held on 16 October, Thomas Zurbuchen, Associate Administrator of NASA's Science Mission Directorate, said, “This is the first European partnership of this type for NASA with ESA and we couldn’t be more excited. We work together as an international community and we do so because together we learn best. Together we can provide best the information to all decision-makers that need to make critical decisions for our future.”

Pierre Delsaux, European Commission’s Deputy Director General for Defence Industry and Space, also recognised the value of international cooperation that has led to the mission as well as the fact that the first Sentinel-6 satellite was renamed to honour the contribution that Michael Freilich has made to science and space and a sign of the corporation between the US and Europe. He added, “The mission is also part of Europe’s Copernicus programme, which has also been built on cooperation between the European Commission, ESA, and Eumetsat and of course industry.”

Alain Ratier, Director General of Eumetsat, added, “Sentinel-6 Michael Freilich will continue a unique climate record and will be in exactly the same orbit as the previous Topex Poseidon and Jason missions to deliver the most accurate measurements of sea-surface height. Sentinel-6 is also part of a global constellation including the two Copernicus Sentinel-3 satellites flying in complementary orbits, both operated from Eumetsat's headquarters in Darmstadt.”

Tell a friend:
Ramping Up to Launch Sea-level Charting Satellite