ESA's Force-feedback Rover Controlled from a Nation Away 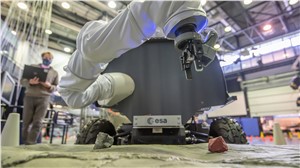 A controller in Germany operated ESA’s gripper-equipped Interact rover around a simulated moonscape at the Agency’s technical heart in the Netherlands, to practice retrieving geological samples. At the same time a smaller Germany-based rover interacted with ESA’s rover as if together at the same site – in a dress rehearsal for a robotic test campaign to the Moon-like volcanic slopes of Mount Etna, scheduled for next year.

The scenario behind this week’s testing is that in the future, astronauts aboard the Lunar Gateway in space will be able to operate rovers on the surface of the Moon, using force-feedback controls – like a high-end gaming joystick that pushes back on its user – to experience a realistic sense of touch comparable to actually being there.

The concept was proven in principle during last year’s Analog-1 campaign, undertaken by ESA’s Human Robot Interaction Laboratory, with the support of the DLR German Aerospace Center’s Institute for Robotics and Mechatronics in Oberpfaffenhofen near Munich.

Analog-1 concluded with ESA astronaut Luca Parmitano in orbit aboard the International Space Station operating the Interact rover on the ground, guided by high-fidelity vision and touch to perform a geological sampling exercise.

“Our original plan was to follow up Analog-1 with a genuine geological field survey, on Mount Etna in Italy,” explains ESA robotic engineer Thomas Krueger, heading the HRI Lab.

“This survey was planned as part of DLR’s ARCHES – Autonomous Robotic Networks to Help Modern Societies – initiative, to develop heterogeneous, autonomous and interconnected robotic systems in the context of a real application.”

“Unfortunately ongoing COVID-19 restrictions make this impossible for now. Instead we had the idea of bringing the rovers together on a virtual basis: we set up a common network infrastructure to make them think they are together even though they are not – like a robotic version of a teleconference – to be a full-scale dress rehearsal for our Mount Etna trip which has now been rescheduled for next summer.”

The test culminated in the Interact rover being jointly operated from DLR more than 660 km away, along with the European Space Operations Centre, ESOC, in Darmstadt, Germany, helping to to select and retrieve geological samples – overseeing the activities in ‘space’.

“These kinds of experiments are very important for us to practice and gain operations experience, which is essential for ESA’s future robotic Moon missions,” states ESOC’s operations engineer Thorsten Graber.

Adopting the role of mission control, the ESOC side employed higher-level commanding and visualization tools developed by the Trasys company.

“Our rover has two cameras, one mounted on a manoeuvrable arm and the other on the gripper at the end of another arm,” explains ESA robotics engineer Edmundo Ferreira.

“This gripper is controlled using a Sigma 7 force-feedback device with six degrees of freedom, allowing the operator to feel whenever its arm encounters the ground or picks up a stone. In fact, the device used at DLR is the flight spare of the force-feedback device Luca employed last year, modified for space by Thales Alenia Space.

“When used in space for real, ‘latency’ – or signal delay – will definitely be an issue, so we have been experimenting to see how users react to increasing levels of lag between a command being given and the rover arm reacting.”

“Our work has always focused on enabling remote operations, but because of the COVID-19 pandemic our team has had to practice remote working simply to make this test campaign possible,” adds Thomas.

“So while we have been collaborating online to develop control software, typically only a single engineer has been working in the lab at once, with phone and online support from the rest of us. Meanwhile control devices were operated at home, to practice operating robotic systems in the lab.”

The Interact rover itself is in the process of upgrading, including the addition of dust protection for its arms and electronics, in preparation for next year’s Mount Etna trip.

Tell a friend:
ESA's Force-feedback Rover Controlled from a Nation Away