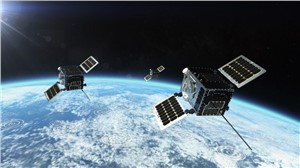 Spaceflight Inc., the leading satellite rideshare and mission management provider, today announced it signed a Multiple Launch Services Agreement (MLSA) with HawkEye 360. Under the agreement, Spaceflight will provide capacity, engineering, and mission management services to launch HawkEye 360’s Cluster 4, 5, and 6 of its radio frequency mapping satellites. Each cluster in the constellation consists of three approximately 30 kg microsats which fly in a unique formation to gather a wide variety of geolocation data.

HawkEye 360 first worked with Spaceflight in 2018, successfully launching its first cluster of spacecraft aboard Spaceflight’s record-breaking SSO-A mission, the first fully-dedicated rideshare mission with 64 smallsats aboard a Falcon 9. HawkEye Cluster 2, which features even more powerful satellites that can geolocate multiple signals simultaneously, is scheduled to launch with Spaceflight on its SpaceX Rideshare-3 (SXRS-3) mission via the Sherpa-FX orbital transfer vehicle on a Falcon 9, no earlier than December 2020.

“When you’re developing a next-gen constellation like HawkEye 360, it’s critical to have a variety of launch options at your fingertips,” said Grant Bonin, senior vice president of business development at Spaceflight. “Spaceflight partners with nearly every vehicle in the world, so we offer unmatched launch flexibility — meaning HawkEye 360 can get their spacecraft exactly where they need to be, exactly when they need to be there. It’s been a true pleasure to play a role in HawkEye 360’s growth over the past years and we’re pleased to support the relationship and their ongoing launch needs.”

“Since launch is challenging, we looked for a partner that could offer a variety of launch options and flexible arrangements to satisfy our mission needs,” said Rob Rainhart, chief operating officer at HawkEye 360. “Spaceflight’s experience in mission management and launch services has allowed us to focus on building our spacecraft while they handle the logistics of getting our satellites safely on orbit. They have been supportive from the early days of HawkEye 360 and we look forward to continuing the relationship as we rapidly expand our constellation.”

Spaceflight works with a large portfolio of launch vehicles, including Falcon 9, Antares, Electron, Vega, and PSLV, to provide a variety of launch options to its customers. The company has launched more than 300 satellites across 32 rideshare missions. In 2019, the company successfully executed nine missions, the most it’s ever launched in one year, sending more than 50 payloads to space. Earlier this year, Spaceflight announced a multi-launch agreement with SpaceX, which secured strategic capacity enabling flexible launch options for its customers and included the upcoming SXRS-3 mission for HawkEye 360.