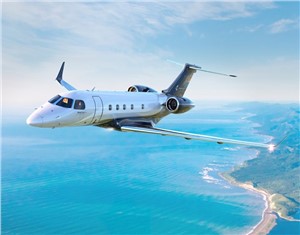 Embraer today announced that the Synthetic Vision Guidance System (SVGS) for the midsize Praetor 500 and super-midsize Praetor 600 business jets was awarded certification by both the civil aviation authority of Brazil, Agência Nacional de Aviação Civil (ANAC), and the civil aviation authority of the United States, the Federal Aviation Administration (FAA). Embraer is the first OEM to receive SVGS certification approval.

The SVGS provides pilots with a dynamic perception of position, trend, and motion, facilitating the transition to utilizing visual references and enabling the safe completion of more missions during inclement weather and lower ceiling approaches. The system allows pilots to operate the aircraft to a decision height of 150 feet (SA-CAT I), as opposed to the regular decision height of 200 feet, increasing operational efficiency and allowing access to several airports during inclement weather and lower ceiling approaches. The SVGS can be used with or without the Head-Up Display (HUD) and is now available for new aircraft and fully retrofittable on all Legacy 450, Legacy 500, Praetor 500, and Praetor 600 aircraft at any Embraer Owned or Authorized Service Center.

“At Embraer, we are committed to continuously improving our already industry-leading products to deliver the ultimate experience in business aviation. Just two months after certifying the electric pocket door and making the HEPA filter standard, we are proud to certify another Praetor 500 and Praetor 600 innovation,” said Michael Amalfitano, President & CEO, Embraer Executive Jets. “Thanks to our unparalleled engineering team and world-class partnership with Collins Aerospace, Embraer is proud to offer business aviation’s first Synthetic Vision Guidance System on the Praetor 500 and Praetor 600, further solidifying their position as the most disruptive and technologically advanced midsize business jets in the market.”

Independent of the Embraer Enhanced Vision System (E2VS), the SVGS is an optional addition to the acclaimed Collins Aerospace Pro Line Fusion flight deck on the Praetor 500 and Praetor 600. The SVGS can be installed either with or without E2VS, delivering even greater flexibility and safety options. When installed alone, SVGS allows for enviable situational awareness, without the investment required for E2VS. When installed together, the aircraft’s operational efficiency is further improved, allowing for even better utilization of the Praetor’s unparalleled short runway performance.