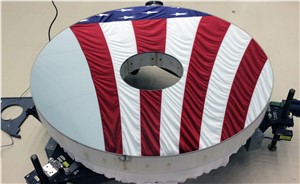 The Nancy Grace Roman Space Telescope’s primary mirror, which will collect and focus light from cosmic objects near and far, has been completed. Using this mirror, Roman will capture stunning space vistas with a field of view 100 times greater than Hubble images.

“Achieving this milestone is very exciting,” said Scott Smith, Roman telescope manager at NASA’s Goddard Space Flight Center in Greenbelt, Maryland. “Success relies on a team with each person doing their part, and it’s especially true in our current challenging environment. Everyone plays a role in collecting that first image and answering inspiring questions.”

Roman will peer through dust and across vast stretches of space and time to study the universe using infrared light, which human eyes can’t see. The amount of detail these observations will reveal is directly related to the size of the telescope’s mirror, since a larger surface gathers more light and measures finer features.

Roman’s primary mirror is 7.9 feet (2.4 meters) across. While it’s the same size as the Hubble Space Telescope’s main mirror, it is less than one-fourth the weight. Roman’s mirror weighs only 410 pounds (186 kilograms) thanks to major improvements in technology.

The primary mirror, in concert with other optics, will send light to Roman’s two science instruments – the Wide Field Instrument and Coronagraph Instrument. The first is essentially a giant 300-megapixel camera that provides the same sharp resolution as Hubble across nearly 100 times the field of view. Using this instrument, scientists will be able to map the structure and distribution of invisible dark matter, study planetary systems around other stars, and explore how the universe evolved to its present state.

The coronagraph demonstrates technology that blocks out the glare of stars and allows astronomers to directly image planets in orbit around them. If the coronagraph technology performs as anticipated, it will see planets that are almost a billion times fainter than their host star and enable detailed studies of giant planets around other suns.

Roman will observe from a vantage point about 930,000 miles (1.5 million km) away from Earth in the direction opposite the Sun. Roman’s barrel-like shape will help block out unwanted light from the Sun, Earth, and Moon, and the spacecraft’s distant location will help keep the instruments cool, ensuring that it will be able to detect faint infrared signals.

Because it will experience a range of temperatures between manufacture and testing on Earth and operations in space, the primary mirror is made of a specialty ultralow-expansion glass. Most materials expand and contract when temperatures change, but if the primary mirror changed shape it would distort the images from the telescope. Roman’s mirror and its support structure are designed to reduce flexing, which will preserve the quality of its observations.

Development of the mirror is much further along than it would typically be at this stage since the mission leverages a mirror that was transferred to NASA from the National Reconnaissance Office. The team modified the mirror’s shape and surface to meet Roman’s science objectives.

The newly resurfaced mirror sports a layer of silver less than 400 nanometers thick – about 200 times thinner than a human hair. The silver coating was specifically chosen for Roman because of how well it reflects near-infrared light. By contrast, Hubble’s mirror is coated with layers of aluminum and magnesium fluoride to optimize visible and ultraviolet light reflectivity. Likewise, the James Webb Space Telescope’s mirrors have a gold coating to suit its longer wavelength infrared observations.

Roman’s mirror is so finely polished that the average bump on its surface is only 1.2 nanometers tall – more than twice as smooth as the mission requires. If the mirror were scaled to be Earth’s size, these bumps would be just a quarter of an inch high.

“The mirror was precisely finished to the Roman Space Telescope’s optical prescription,” said Bonnie Patterson, program manager at L3Harris Technologies in Rochester, New York. “Since it’s so much smoother than required, it will provide even greater scientific benefit than originally planned.”

Next, the mirror will be mounted for additional testing at L3Harris. It has already been extensively tested at both cold and ambient temperatures. The new tests will be done with the mirror attached to its support structure.

“Roman’s primary mirror is complete, yet our work isn’t over,” said Smith. “We’re excited to see this mission through to launch and beyond, and eager to witness the wonders it will reveal.”

The Nancy Grace Roman Space Telescope is managed at Goddard, with participation by NASA's Jet Propulsion Laboratory and Caltech/IPAC in Pasadena, California, the Space Telescope Science Institute in Baltimore, and a science team comprising scientists from research institutions across the United States.