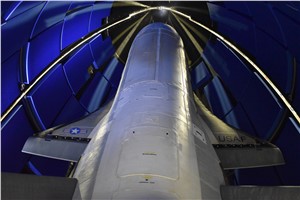 The U.S. Department of the Air Force and Boeing [BA] X-37B autonomous spaceplane is receiving the prestigious Robert J. Collier Trophy for the greatest American achievements in aeronautics and astronautics of 2019. The X-37B set a new 780-day on-orbit endurance record and completed an overflight of the United States, using Federal Aviation Administration airspace, before making a pinpoint landing at NASA's Kennedy Space Center.

The National Aeronautic Association is awarding the 2019 Collier to the X-37B for advancing the performance, efficiency and safety of air and space vehicles.

Designed and built by Boeing, operated in partnership with the U.S. Space Force, and managed by the U.S. Department of the Air Force Rapid Capabilities Office, the X-37B is a reliable, reusable, uncrewed space test platform designed to carry experiments to orbit and return them to Earth for evaluation.

"Underscoring the importance of space to the nation, the Collier Trophy celebrates the record-setting mission of the X-37B," said Secretary of the Air Force Barbara Barrett. "Most Americans use space daily for navigation, information, and communication. Sophisticated and uncrewed, the X-37B advances reusable spaceplane technologies and operates experiments in space that are returned for further examination on Earth."

In addition, Boeing facilitates the integration of experiments into the X-37B system and helps identify future reusable-platform experiment opportunities for each mission. X-37B is the 33rd Boeing effort to receive a Collier.

"We are truly honored that the women and men of the X-37B team are being recognized with the Collier Trophy," said Boeing Defense, Space & Security President and CEO Leanne Caret. "Not only have they earned a place among our industry's legends through their commitment to innovation and performance, but their accomplishments will influence the next generation of space and aerospace development for the benefit of all humanity."

In 2019, the spaceplane broke its own on-orbit endurance record of 718 days. The program has logged more than 2,865 days and travelled more than 1 billion miles on-orbit in total. Originally designed for missions of 270 days, the X-37B has set endurance records during each of its five previous flights. Its first mission launched in 2010.

This is the ninth Collier Trophy shared by the U.S Department of the Air Force and its forerunners, and Boeing and its legacy companies. Prior shared wins include iconic air and space achievements like the B-52, X-15, Global Positioning System and the C-17 Globemaster III.

First awarded in 1911, the trophy's past recipients include Orville Wright; the Apollo 11 lunar landing team; the International Space Station, built by Boeing for NASA; the F/A-18E/F Super Hornet, built by Boeing for the U.S. Navy; and the Boeing 787, 777 and 747 commercial airplanes.