Weightless Action on the Space Station - Power, Bones and Bubbles

European science progressed at a slower pace on the International Space Station in the past month. As a series of spacewalks to power up the space habitat came to an end and two of its passengers left for home Earth, intriguing bubbles puzzled researchers and left them wanting to know more. 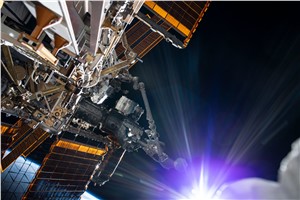 The longest foam
More bubbles, please. The Space Station has witnessed the longest science run with foams for the Foam-Coarsening experiment. This research mixed varying amounts of water and soap inside small tubes for 14 days in a row. A high-speed piston shook the mixture for two minutes, followed by 100 hours of recording with laser optics, photon counters and high-resolution cameras to achieve the best science.

The result? The foam bubbles become larger, last longer and their motion is very different from what you would expect on Earth. In space, bubble sizes are evenly spread and that makes it easier for scientists to study them in greater detail.

In some cases, scientists detected an anomalous behaviour in the foam – a hole appeared just in the middle of the bubbles. The team decided to follow up this unexpected phenomenon, and extended the foaming time to up to 20 minutes in some of the tubes.

The foaming process slows down over time and it is stopped after two weeks, or when there are only five bubbles left inside the tubes. Scientists call it the “five bubble criteria” – this approach helps them estimate when to finish the measurements.

A foam’s existence in space is marked by more equilibrium than on Earth because drainage is suppressed. Foams have huge benefits for our daily lives – they are lighter, offer better insulation and can be just as strong as compact materials.

So, maybe think outside your bubble next time you look at a foam, be it in your beer, cream or shaving gel.

Bones and stress
Roscosmos’ Anatoly Ivanishin and Ivan Vagner took part in the second session of EDOS-2 and Immuno-2 experiments as test subjects.

Astronauts lose up to 1% of their bone mass each month they stay in space. Studying what happens during long stays on the Space Station offers a good insight into this form of accelerated osteoporosis, and how to stop it in patients on Earth as well.

The Early Detection of Osteoporosis in Space experiment, or EDOS-2, is looking at changes in bone structure before and after spaceflight. Researchers study markers in blood and urine in a dozen of astronauts, as well as through a tomography scan.

Scientists aim to better understand bone loss in space and find rehabilitation techniques not only for astronauts, but also for the thousands of patients on Earth suffering from bone diseases or fractures during ageing.

The way the body responds to stress as it adapts to the challenging environment of space is also under investigation. Through brain scans, monitoring breathing and looking at samples from hair and blood, researchers of the the Immuno-2 experiment hope to learn more about how living in stressful conditions affect immune systems.

More power and new ‘kids’ on the block
The International Space Station’s power system is heavily dependent on its batteries. The month of July saw the power spacewalk series to increase the Station’s efficiency drawing to a close.

Less is more, and the replacement programme cut down the old 48 nickel-hydrogen batteries to 24 lithium-ion new ones.

A new visiting vehicle had some issues approaching the Station on 23 July. Russia launched its second unpiloted mission of the year, the 76th Progress mission, to deliver cargo to the Space Station.

The Progress MS-15 spacecraft deviated from the flight plan momentarily but there was no need to hit the abort button. The automated docking was successful, and the spacecraft arrived safely about three hours after launch loaded with over two tonnes of water, oxygen, fuel, experiment payloads and food.

After 62 days on the Space Station, the first crewed test flight came to an end. NASA astronauts Robert Behnken and Douglas Hurley spent more than 100 hours supporting science and technology demonstrations at their space home.

Just over 45 years since the last North Americans splashed down in the ocean, the two astronauts landed in the Gulf of Mexico on 2 August.

Tell a friend:
Weightless Action on the Space Station - Power, Bones and Bubbles