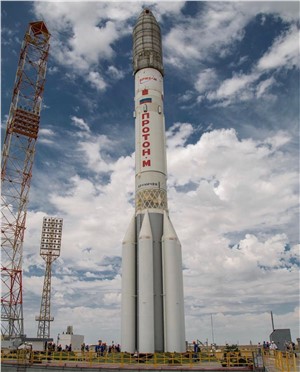 The Express-80 and Express-103 communications satellites have been successfully launched by the launcher Proton from the Cosmodrome of Baikonour in Kazaksthan.

The satellites are the result of the  partnership between the Russian company ISS Reshetnev, providing the H1000 platforms and Thales Alenia Space, a Thales (67%) and Leonardo (33%) joint venture, providing the payloads.

The mission of both  Express-80 and Express-103 satellites, which will last 15 years, is to provide fixed and mobile communications, digital television and radio broadcasting, high-speed Internet access and data transmission services in the Russian territory, the operator is  RSCC (Russian Satellite Communication company).

The partnership with ISS-Reshetnev started in 2000 when, Thales Alenia Space and ISS implemented a joint marketing strategy based on the ISS Express-1000 satellite platform. By combining their complementary products and technologies, ISS Reshetnev and Thales Alenia Space formed a partnership leading to major international successes, such as Telkom 3, Kazsat 3 and Yamal 401 satellites.