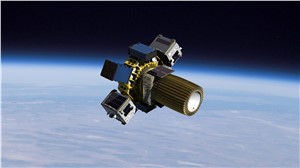 Spaceflight Inc., the leading satellite rideshare and mission management provider, announced today that it will be flying its next generation orbital transfer vehicle, Sherpa-FX, on a fully dedicated rideshare mission with SpaceX. The mission, called SXRS-3 by Spaceflight, is scheduled to launch on a Falcon 9 no earlier than December 2020. Spaceflight has contracted 16 spacecraft for this mission from organizations including iQPS, Loft Orbital, HawkEye 360, NASA’s Small Spacecraft Technology program, Astrocast, and the University of South Florida Institute of Applied Engineering.

In addition to the customer spacecraft, Sherpa-FX will transport multiple hosted payloads including one for Celestis Inc., as well as several that will demonstrate technologies designed to identify and track spacecraft once deployed. By demonstrating these tracking systems on orbit, Spaceflight customers will have access to flight-proven technologies that can mitigate space congestion and provide the foundation of effective and responsible space traffic management. Technologies onboard Sherpa-FX include payloads by NearSpace Launch, Keplerian Technologies and their hardware partner Tiger Innovations, and Space Domain Awareness Inc. These innovative payloads will provide spacecraft developers an independent capability to identify and track their spacecraft without drawing on the host spacecraft resources.

“Spaceflight is committed to providing unmatched launch flexibility for customers -- whether that’s re-manifesting on a different vehicle due to delays, deployments to exotic or special orbits, or the ability to fly and operate hosted payloads,” said Grant Bonin, senior vice president of business development for Spaceflight Inc. “In-space transportation is essential to meeting our customer’s specific needs to get their spacecraft delivered to orbit exactly when and where they want it. If you think of typical rideshare as sharing a seat on a train headed to a popular destination, our next-generation Sherpa program enables us to provide a more complete ‘door-to-door transportation service’.”

Spaceflight’s Sherpa-FX is the first innovative orbital transfer vehicle to debut in the company’s Sherpa-NG (next generation) program. The vehicle is capable of executing multiple deployments, providing independent and detailed deployment telemetry, and flexible interfaces, all at a low cost. The company’s Sherpa-NG program is a family of space vehicles, continuing the tradition of the company’s first orbital free flyer on the historic SSO-A mission, which successfully delivered 64 unique spacecraft on orbit aboard a Falcon 9.

In June 2020, Spaceflight announced it signed a Multi-Launch Agreement with SpaceX, securing capacity on several upcoming flights. The companies are currently working toward the launch of an upcoming Starlink mission in which Spaceflight procured a portion of the launch for its customer BlackSky, designed and built the adapter and harnessing, integrated the spacecraft, and provided mission management services for its customer.

“We aim to make getting to space easier, faster and with more reliability than ever before,” added Curt Blake, president and CEO of Spaceflight. “To do that, we have to build flexibility into everything we offer -- from our contracting practices, to integration processes that enable spacecraft to move seamlessly between launch vehicles, to providing customers with a wide range of mission services. Now we’re solving some of the industry’s most pressing challenges by providing greater spacecraft management awareness and customized orbital delivery. We couldn’t be more excited to expand our comprehensive suite of launch services to support our customers’ mission needs.”

Spaceflight works with a large portfolio of launch vehicles, including Falcon 9, Antares, Electron, Vega, and PSLV, to provide a variety of launch options to its customers. The company has launched more than 270 satellites across nearly 30 rideshare missions. In 2019, the company successfully executed nine missions, the most it’s ever launched in one year, sending more than 50 payloads to space.