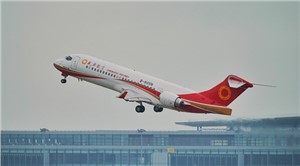 On the occasion of the fourth anniversary of ARJ21's operation at Chengdu Airlines, Chengdu Airlines received the 21st ARJ21 aircraft in Shanghai on June 28th, 2020. It is reported that this ARJ21 aircraft with a nationality registration number of B-605N is in all economy-class cabin configuration and has already flown to Chengdu on the same day.

The ARJ21 aircraft operating flight EU6679 with a passenger load flew from Chengdu to Shanghai on June 28th, 2020, successfully completing its first commercial flight, and officially starting its journey in commercial operation. In the past four years, Chengdu Airlines, as the first operator of ARJ21, has been committed to flying the aircraft as a benchmark and as a demonstration. ARJ21 aircraft has operated in 46 international and domestic routes in the cities covering most regions of China, six operation bases has be established respectively in Chengdu, Harbin, Yueyang, Quanzhou, Weihai and Yinchuan, and indicators such as aircraft flight volume, flight punctuality rate and flight income level have been continually increased to steadily realize large-scale operation.