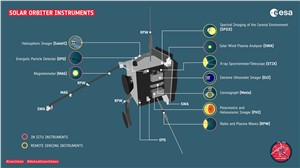 ESA’s Solar Orbiter has successfully completed four months of painstaking technical verification, known as commissioning. Despite the challenges imposed by the COVID-19 pandemic, the spacecraft is now ready to begin performing science as it continues its cruise towards the Sun.

When Solar Obiter blasted into space on an Atlas V rocket from Cape Canaveral, Florida, on 10 February, the teams behind the €1.5 billion mission did not anticipate that within weeks, the spread of COVID-19 would evict them from their high-tech control rooms, making the challenging process of commissioning the spacecraft’s instruments even harder.

In normal circumstances, many of the project’s scientists and engineers would have gathered at the European Space Operations Centre (ESOC) in Darmstadt, Germany. Together, they would have worked in close cooperation with the spacecraft operators, to bring the spacecraft and its instruments to life.

This happened more or less as usual during the most challenging early weeks of Solar Orbiter’s in-orbit existence, but when the instrument teams were invited to ESOC in March, the situation in Europe was rapidly changing.

Each of the ten instrument teams needed many representatives on site. Two or three from each team were allowed in a dedicated Solar Orbiter control room. “The other representatives worked from a dedicated support area,” says Sylvain Lodiot, ESA’s Solar Orbiter Spacecraft Operations Manager. It was not unusual to have 15 or more people in the main control room working too. But within a week, it became clear that European countries were heading into lockdown and so the external teams were asked to return home.

The Italian-German-Czech team behind the METIS coronograph, an instrument measuring the visible, ultraviolet and extreme ultraviolet emissions of the solar corona in unprecedented temporal and spatial resolution, was just getting ready to switch on the instrument for the first time when the decision was made that people from that time coronavirus hotspots in Italian regions Piemonte and Lombardy were no longer allowed to enter ESOC for safety reasons.

“We had a hard time in trying to re-arrange the team skills on the fly with those who could enter,” says Marco Romoli, METIS principle investigator. “And thanks to ESOC people and to the steady nerves of those present, we were able to successfully complete the activity.”

The situation became even more serious when several workers at ESOC tested positive for the virus, and the site effectively closed.

The COVID lockdown
“We had to protect the people,” says Sylvain, whose last task before going home was to switch off all the instruments on Solar Orbiter. “It felt horrible because I didn’t know when those instruments were coming back online,” he says.

In the event, it was only about a week later that a skeleton staff returned and with full social distancing measures in place began working remotely with the instrument teams to get the commissioning done.

One of the instrument teams most affected was the Solar Wind Analyser (SWA) team. The solar wind, which is constantly released from the Sun, is composed of a mixture of electrically charged particles called ions, and electrons. The SWA instrument comprises three different sensors to measure the fluxes and composition of these various particle populations. Each sensor operates as a kind of ‘electrical periscope’ that uses high voltages, up to 30 kilovolts in one case, to divert the solar wind particles into the detector.

To operate those high voltages safely, the team had planned not to turn on the instrument until at least a month after launch. This was intended so no traces of Earth’s atmosphere would remain within the SWA sensors. If there were, these high voltages could cause arcing and damage the sensors.

The switch on process for each of the SWA detectors is long because each high-voltage subsystem must be powered up in steps of just 20 or 50 volts at a time. After each increase, the instrument is checked to make sure nothing untoward has happened.

When SWA’s principal investigator Christopher Owen, of the Mullard Space Science Laboratory, University College London (MSSL/UCL), had left Germany, he and his team had begun to make plans to commission the instrument from their lab in the UK. But then the UK lockdown was announced, meaning a move to working from the home office for almost everybody.

“When I left the lab, I grabbed a couple of laptops and four screens, and brought them home. I then evicted my two-year-old from his nursery and set everything up in there,” says Christopher. And from this temporary control centre, once ESOC had returned to work, he worked remotely with the rest of the SWA team and the skeleton staff in Darmstadt to get the instrument commissioned.

“We had serious doubts about whether we could work like this,” says Sylvain about the process in general, “but we adapted and in the end, it worked very well because the team all knew each other.”

The other instrument teams also successfully finished their commissioning. “This is undoubtedly the first mission whose instruments were completely commissioned from people's homes,” says David Berghmans, from the Royal Observatory of Belgium, Brussels, Belgium, and principal investigator of the Extreme Ultraviolet Imager (EUI).

Not only did the job get done, but they made up for lost time and managed to complete their commissioning on the original timeline. “Even in a normal world I would be very happy with where we are now,” says Daniel Müller, Solar Orbiter Project Scientist at ESA, “I never expected that almost everything would work flawlessly out of the box.”

That’s testimony to the expertise with which the spacecraft was made by the prime contractor Airbus DS (UK) and its instruments were made by the various instrument teams. On 25 June, the Solar Orbiter Review Board endorsed this achievement by declaring the Mission Commissioning Results Review successful.

For César García Marirrodriga, ESA’s Solar Orbiter’s Project Manager, it was a big moment because with commissioning over, his job is done and he hands over the spacecraft to the mission operations manager. “I’m very happy to hand it over because I know it is going in the right direction,” says César.

And for Daniel, it is a big moment too because now the mission is ready to perform science. “In these four months since launch, the 10 instruments onboard have been carefully checked and calibrated one by one, like tuning individual musical instruments. And now it is time for them to perform together,” he says.

This month’s 'remote-sensing checkout window’ from 17 to 22 June presented the first opportunity to have all the instruments play together. Receiving the recordings from the spacecraft, which is currently more than 160 million kilometres away, will be completed in the next few days.

“We’re very excited about this first ‘concert’. For the first time, we will be able to put together the images from all our telescopes and see how they take complementary data of the various parts of the Sun including the surface; the outer atmosphere, or corona; and the wider heliosphere around it. This is what the mission was built for,” says Daniel. These first light images will be released to the public in mid-July.

100 days worth of data
Other instruments are already collecting data too. In the case of the Magnetometer (MAG), this was first switched on just a day after launch. “We got just under 100 days’ worth of data through the commissioning period, and it's wonderful data,” says Helen O’Brien, from Imperial College and MAG’s chief engineer.

That data will allow the team to understand the magnetic field being generated by the spacecraft itself, so that they can now remove it from their science data to leave just the magnetic field being carried into space away from the Sun. And there is plenty of data already. The team already has more than two billion scientific measurements to analyse. “The data is outstanding, really, really good, so we’re very happy,” says Tim Horbury, Imperial College, UK, and principal investigator for the instrument.

The mission now continues on course to the Sun. During this cruise phase, the spacecraft's in-situ instruments will gather scientific data about the environment around the spacecraft, while the remote-sensing instruments will be fine-tuned by the teams in preparation for science operations in closer vicinity of the Sun. The cruise phase lasts until November 2021, after which Solar Orbiter will begin the science phase of its mission.