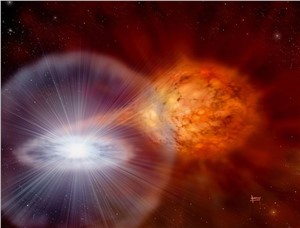 The element lithium has all kinds of uses on Earth: in lithium-ion batteries, in heat-resistant glass and ceramics, and in certain medications that psychiatrists prescribe. Now, a new NASA-funded study suggests that most of the lithium in our solar system — and even in the galaxy — came from bright stellar explosions called classical novae.

A classical nova happens when a white dwarf (a stellar remnant about the diameter of Earth, but the mass of the Sun) is orbited by a larger star. Gas falls from the larger star onto the white dwarf and when enough gas has accumulated on the white dwarf, an explosion, or nova, occurs. There are about 50 of these explosions per year in our galaxy, and the brightest ones are observed by astronomers worldwide.

Researchers led by Sumner Starrfield of Arizona State University, funded by a NASA theory grant, used a mixture of computer predictions and observational data to determine the amount of lithium produced in a nova explosion. The computer models estimated how gas is ejected in a nova and what its chemical composition should be.

To develop these models, researchers referenced observations of classical novae from many different telescopes. Their previous work used ground-based telescopes, space telescopes including NASA’s Hubble and Spitzer, and the 747 airborne observatory SOFIA.

While the big bang created a small amount of lithium in the initial formation of the universe, the majority of lithium gets manufactured in the nuclear reactions that power the nova explosions. This study suggests that the nova explosions would then distribute that lithium throughout the galaxy, and deliver most of the lithium we use today in electronics and medicine.

This new insight about lithium represents one piece of the puzzle that many astronomers are working on: Which kinds of stellar processes produce which elements.

The team also determined that a fraction of these classical novae will evolve until they explode as kind of supernova called type Ia. These exploding stars become brighter than a galaxy and can be discovered at very large distances in the universe.

Type Ia supernovae have been used to study the evolution of the universe and were the supernovae used in the mid-1990s to discover dark energy, which is causing the expansion of the universe to speed up. These explosions also produce much of the iron in the galaxy and solar system, an important constituent of our red blood cells, which carry oxygen throughout the body.

“This is ongoing research in both theory and observations,” says Starrfield. “While we continue to work on theories, we’re looking forward to when we can use NASA’s James Webb Space Telescope and the newly named Nancy Grace Roman Space Telescope to observe novae and learn more about the origins of our universe.”