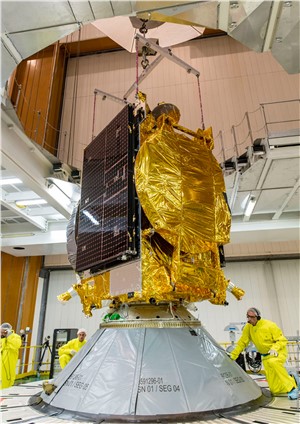 Final payload integration has begun for Arianespace’s year-opening mission on January 16, with GSAT-30 now installed atop its Ariane 5 launcher at the Spaceport in French Guiana.

This satellite was positioned on the assembled Ariane 5’s core cryogenic stage during activity inside the Spaceport’s launch vehicle Final Assembly Building – placing it as the mission’s lower passenger, to be released second in the flight sequence after its co-passenger, EUTELSAT KONNECT.

GSAT-30 was produced by the Indian Space Research Organization (ISRO) using an I-3K platform, and is to provide high-quality television, telecommunications and broadcasting services. It will have a liftoff mass of some 3,357 kg. and is to ensure continuity of service for India’s INSAT 4A, positioned at 83 deg. East longitude.

Connecting EUTELSAT KONNECT
With GSAT-30 affixed to the Ariane 5, all is clear for EUTELSAT KONNECT’s integration over it as part of the launcher’s “upper composite” – which also includes the SYLDA dispenser system and protective payload fairing as a combined unit.

EUTELSAT KONNECT is a new-generation high-throughput satellite that will deliver services across Europe and Africa. Produced by Thales Alenia Space, it is the first to use the company’s Spacebus NEO platform developed under the Neosat Partnership Project conducted by the European and French space agencies (ESA and CNES). EUTELSAT KONNECT will weight approximately 3,620 kg. at liftoff and is to operate from an orbital slot at 13 deg. East.

Arianespace has identified a total of 12 flight opportunities from French Guiana this year using its full launcher family – which also includes Soyuz and Vega.

Tell a friend:
GSAT-30 is Installed on Ariane 5 for Arianespace's First Mission of 2020