Arianespace successfully launched five satellites on its year-ending Soyuz mission, underscoring the company's continuing ability to deliver "any payload to any orbit at any time" from Europe's Spaceport in French Guiana. 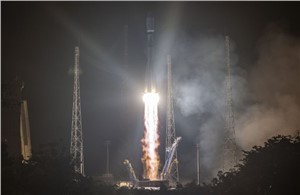 Today’s morning launch marked the Russian-built vehicle’s 23rd liftoff from the Spaceport in French Guiana, and the 49th Soyuz mission overall for Arianespace (including 26 originating from Baikonur Cosmodrome in Kazakhstan, performed by the company’s Starsem affiliate). It provided an estimated total lift performance of 3,250 kg., including the satellites and ASAP-S multi-passenger dispenser system.

“For our ninth and last launch of the year, success is here for our customers and our partners,” said Arianespace CEO Stéphane Israël, who provided his post-flight comments from the Spaceport’s mission control center. “This success shows Arianespace’s ability to deliver for European institutions and to orbit innovative small satellites.”

Earth monitoring for Italy
To be utilized for Earth observation, COSMO-SkyMed Second Generation is the fourth satellite launched by Arianespace for the Italian Space Agency (ISA) and Ministry of Defence. It was produced by Thales Alenia Space based on the manufacturer’s PRISMA platform and will deliver global coverage with a 16-day repeat cycle.

The full system of COSMO-SkyMed Second Generation satellites – developed to address the requirements of both commercial and government customers, as well as the scientific community – is designed to set new performance standards for space-based radar observation systems in terms of precision, image quality and the flexibility of user services.

COSMO-SkyMed Second Generation satellites, including the primary passenger orbited on today’s mission success with Soyuz, are equipped with synthetic aperture radars (SAR), allowing them to make observations under any weather or light conditions, both day and night.

Hunting exoplanets with CHEOPS
Produced by Airbus, CHEOPS will be used by the European Space Agency (ESA) on a mission to study bright, nearby stars that already are known to host exoplanets, in order to make high-precision observations of the planet’s size. It is the 74th satellite launched by Arianespace at the service of ESA.

CHEOPS will focus on planets in the super-Earth to Neptune size range, with its data enabling the bulk density of the planets to be derived – a first characterization step towards understanding these alien worlds.
Supporting European institutions

The three auxiliary passengers on today’s Soyuz mission, designated Flight VS23 in Arianespace’s numbering system, were orbited for the benefit of European institutions. OPS-SAT is the world’s first free-for-use, in-orbit testbed for new software, applications and techniques in satellite control. Its launch was performed for Tyvak on behalf of ESA.

EyeSat, a cubesat designed to study zodiacal light and image the Milky Way, is being financed and developed by the French CNES space agency within the scope of the Janus project, which is designed to encourage students in universities and engineering schools to develop their own very small satellites.

Jointly financed and developed by CNES and Hemeria, ANGELS (for: Argos Néo on a Generic Economical and Light Satellite) is the first nanosatellite produced by French industry. It will collect and determine the position of low-power signals and messages sent by the 20,000 ARGOS beacons now in service worldwide.

Flight VS23 was Arianespace’s third launch in 2019 using a medium-lift Soyuz, and the ninth overall this year across its full family of launchers – which also includes the heavy-lift Ariane 5 and lightweight Vega.

Tell a friend:
Soyuz Orbits a Multi-passenger Payload on Arianespace's 9th and Final Launch of 2019