All Instruments Onboard Rosalind Franklin Rover 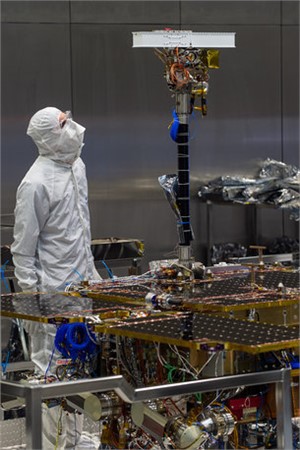 The full suite of scientific instruments, including cameras that will give us our eyes on Mars, the drill that will retrieve pristine soil samples from below the surface, and the onboard laboratory that will seek out signs of life are all installed on the ExoMars rover.

The rover, named after the pioneering scientist Rosalind Franklin, is part of the ESA-Roscosmos ExoMars programme, and is nearing completion at Airbus Defence and Space, Stevenage, UK. The rover is now seen with its recently added PanCam, which sits on top of a mast that rises 2 m above the ground. PanCam will be fundamental in the day-to-day scientific operations of the rover to assist with scientific decisions on where to drive and drill.

Determining whether life ever existed on the Red Planet, or still does today, is at the heart of the ExoMars programme. While spacecraft exploring Mars in the last decades have shown that the surface is dry and barren, billions of years ago it was much more reminiscent of Earth, with water flowing in rivers and lakes, perhaps seas. If life ever began in this very early period, scientists think that the best chances to find evidence for it is to look underground, in ancient regions of Mars that were once influenced by water.

The Rosalind Franklin rover will land in what scientists think might have been an ancient ocean, close to the boundary where channels from the southern highlands of Mars connect to the smooth northern lowlands. After the initially wet era in the planet’s early history, lavas from volcanic eruptions covered large areas of Mars, some resisting erosion until today. This means that the landing site’s underlying materials may only have been exposed recently, initially protecting them from space radiation and later making them accessible to the rover and its analytical tools.

PanCam, with its stereo and high-resolution cameras will provide detailed views of geologically interesting features in visible and near-infrared wavelengths, and together with measurements made by the spectrometers, will tell us what the rocks are made of and if they were influenced by water in the past. In select locations the drill will retrieve samples from up to 2 m below the surface, delivering them to the onboard science laboratory for detailed analysis to sniff out signs of biological signatures.

A camera on the bottom of the drill unit will provide close-up images of the soil that is churned out by the drilling action. When the drill is in ‘stowed’ position the camera will be able to image the area in front of the rover. The close-up imager, or Clupi recently underwent final calibration tests at ESA’s technical facility in the Netherlands, before being shipped to Stevenage to be attached to the drill unit.

In addition to the cameras, spectrometers, drill and analytical lab, the rover also has sub-surface sounding radar and neutron detector.

“Our rover has really taken shape,” says Jorge Vago, ESA’s ExoMars rover project scientist. “We have an incredibly powerful scientific payload to explore the surface and subsurface of Mars on our quest to find biosignatures.”

With the scientific suite of instruments onboard, the rover is sealed up in a dedicated cleanroom. Once final checks have been completed, the rover will be transported from the UK to Toulouse, France. There it will undergo environmental testing to confirm it is ready for the conditions on Mars. Once complete it will move on to Cannes, France for final integration with the lander platform, named Kazachok, and with the descent module and carrier module that will transport the mission from Earth to Mars.

The mission is foreseen for launch in just under a year from now (the launch window is 26 July–13 August 2020) on a Russian Proton-M launcher, arriving at Mars in March 2021.

Tell a friend:
All Instruments Onboard Rosalind Franklin Rover