Drones Will Fly for Days With This New Technology 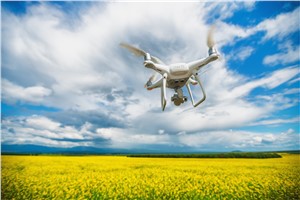 Researchers with Berkeley Lab and UC Berkeley just broke another record in thermophotovoltaic efficiency, an achievement that could lead to ultralight engines that can power drones for days.

For the past 15 years, the efficiency of converting heat into electricity with thermophotovoltaics – an ultralight alternative power source that could allow drones and other unmanned aerial vehicles to operate continuously for days – has been stalled at 23 percent.

Recently, the team of researchers led by corresponding author Eli Yablonovitch recognized that a highly reflective mirror installed on the back of a photovoltaic cell can reflect low energy infrared photons to reheat the thermal source, providing a second chance for a high-energy photon to be created and generate electricity. This groundbreaking discovery – reported on July 16 in the Proceedings of the National Academy of Sciences – has allowed the researchers to raise the efficiency of thermophotovoltaics to an unprecedented 29 percent.

According to Yablonovitch, who is a senior faculty scientist in Berkeley Lab’s Materials Sciences Division and a professor of electrical engineering and computer science at UC Berkeley, the current study builds on work that he and students published in 2011, which found that the key to boosting solar cell efficiency is, counterintuitively, by externally extracting light from an intense internal luminescent photon gas.

The researchers are now aiming to reach 50 percent thermophotovoltaic efficiency in the future by applying these new scientific concepts.

Tell a friend:
Drones Will Fly for Days With This New Technology