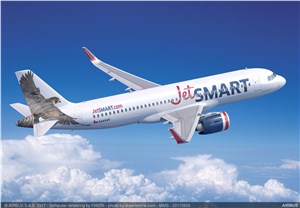 This year's aviation industry gathering in Paris ends with an order intake of more than 1.3 billion US Dollars (about 1.2 billion euros; according to list price) for MTU Aero Engines. The orders for Germany's leading engine manufacturer mainly result from orders and memorandums of understanding (MoU) for the geared turbofan (GTF) engines of the PW1000G family for short- and medium-range aircraft. They account for around 95 percent of the volume during the Paris Air Show. There was also a commitment for the GEnx long-range engine, in which MTU also has a stake.

MTU's most recent orders predominantly stem from Airbus aircraft. The largest single order was placed by JetSMART with engines for 85 A320neo Family aircraft. Engines for a further 142 aircraft in this category were ordered by several undisclosed customers. The Mexican airline Viva Aerobus opted for the GTF for 41 A321neo aircraft. In addition, SMBC Aviation Capital and Aviation Capital Group each ordered 20 aircraft from this family. The engine selction for the A321XLR long-haul version presented at the Paris Air Show are largely still pending. Only the four aircraft for Middle East Airlines already have GTF engines. The commitments from Air Lease for 50, from Nordic Aviation Capital for 20 and from Delta Airlines for 5 A220 aircraft further strengthen MTU's order intake. Through its share in the GEnx program, MTU benefits from the orders for the Boeing 787. Korean Air opted for 30 aircraft of this type.

“Modern and efficient engines determine MTU's future in the commercial engine business,” says MTU CEO Reiner Winkler, commenting on the order influx. “This is demonstrated at the Paris Air Show by the continued success of the geared turbofan family and the GEnx engine. While we are mastering the ramp-up of these programs, we are also working on the long-term technological prospects for sustainable aviation,” Winkler continued.

MTU is simultaneously researching evolutionary approaches that can already be operated with sustainable fuels (eFuels), as well as alternative propulsion concepts such as hybrid-electric flying and fuel cells. The second generation of GTFs still offers significant potential and is set to achieve further significant emission savings in an optimized manner. The new engines are expected to be in the air by the mid-2030s. “In addition, we are already thinking about civilian engines that could fly after 2050. Because the overall goal is emission-free flying,” says Winkler. With MTU's announced participation in the small aircraft Silent Air Taxi, the engine manufacturer is underscoring its commitment to future innovations in aviation.