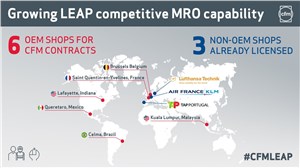 Since the LEAP engine program was launched more than a decade ago, CFM has committed to both developing internal capability through CFM Services, as well as working with its partners to expand third-party MRO capability to support the industry’s fastest-growing fleet.

The LEAP service model is based on the highly-competitive CFM56 model, which has the most open MRO environment in the industry. More than 40 shops including third-party providers, along with CFM parent companies GE Aviation and Safran Aircraft Engines, currently perform CFM56 engine overhauls, resulting in about two-thirds of the worldwide shop visits being completed by non-CFM shops. By having a similar choice of MRO providers for the LEAP engine, aircraft operators and owners get the benefit of competition: lower maintenance cost over the engine life cycle; a broader range of services; and higher residual values.

For the LEAP fleet, there are currently four CFM internal overhaul sites on line and that will expand to a total of six locations by the end of 2019, including Lafayette, Indiana; Queretaro, Mexico; Celma, Brazil; Saint Quentin-en-Yvelines, near Paris, France; Brussels Belgium; and Kuala Lumpur, Malaysia.

In addition to CFM shops, in February 2018, Lufthansa Technik became the first CFM Branded Service Agreement (CBSA) licensee for the LEAP-1A engine. This agreement provides commercial and technical support to Lufthansa Technik so it can offer CFM solutions to maintain the LEAP installed base to the highest standards. CFM offers other licenses that enable MRO providers to offer third-party LEAP engine overhaul. Air France-KLM and TAP have already announced LEAP services capability.

CFM is in negotiation with other providers and expects additional engine overhaul license requests as LEAP shop visit demand will grow rapidly in the next five to ten years as a result of the volume of engines in service, supporting a competitive MRO environment.