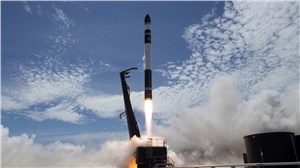 “‘It’s Business Time’ represents the shift to responsive space. We always set out to create a vehicle and launch site that could offer the world’s most frequent launch capability and we’re achieving that in record time,” said Rocket Lab founder and CEO Peter Beck.

“Rocket Lab is the only small launch provider that has reached orbit and delivered on promises to open access to space for small satellites. We can have payloads on orbit every 72 hours and our rapidly expanding manifest shows this is frequency is critical for the small satellite market,” he added.

Rocket Lab can achieve an unprecedented launch frequency thanks to a vertically integrated vehicle manufacturing process that enables Rocket Lab to roll an Electron vehicle off the production line every week. To meet a burgeoning 2018/19 launch manifest, Rocket Lab has rapidly scaled production of the Electron launch vehicle across its three-acre headquarters and production facility in Huntington Beach, California. The company will produce 100 3D printed Rutherford engines this year to support a monthly launch cadence by the end of 2018.