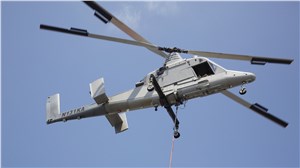 “We are proud that K-MAX® will be fulfilling this role in the critical re-building effort for the people of Puerto Rico,” stated Drake Klotzman, General Manager of the MRO Division of Kaman Aerospace. “This mission will utilize K-MAX®'s 6,000 pound lift and precision placement capability, small operating foot print, and low operating costs and will present a strong value proposition to ROTAK and the end users. Strong demand has resulted in extended K-MAX® production and is cause for consideration of the manufacture of additional aircraft.”

Ely Woods, Owner and Director of Maintenance for ROTAK stated, “We are looking forward to performing this important role in the recovery and clean-up of the devastation from hurricane Maria. Further, I am looking forward to taking delivery later this year of the two additional K-MAX® aircraft we have on order.”

Development of the K-MAX® was led by Kaman founder and former CEO, aviation pioneer Charles H. Kaman, and received Federal Aviation Administration certification in 1994. The single-engine, single-seat K-MAX® is a rugged low-maintenance aircraft that features a counter-rotating rotor system and is optimized for external load operations and designed specifically for vertical reference flight. The aircraft can lift up to 6,000 pounds (2,722 kg).