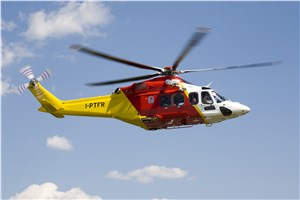 This is the first of four AW139 helicopters to be leased from LCI and delivered over the coming months. Westpac Rescue Helicopter Service is a not-for-profit, community-supported operation providing essential aeromedical, search and rescue services. Each year the Westpac Rescue Helicopter Service undertakes more than 1,400 missions across the Hunter, Central Coast, Mid North Coast, New England and North West regions of Australia .

Following fit-out for EMS operations in Australia and crew training operations, the first helicopters will enter service during the first quarter of 2017 and will be operated under contract for NSW Ambulance, on behalf of NSW Health within the Government of New South Wales . Introducing these helicopters is part of the NSW Government's commitment to improve its Helicopter Retrieval Network through the provision of higher quality clinical care, faster and safer than before

The high-specification aircraft, including full medical and rescue equipment and winch, have been financed under a tripartite, 10-year arrangement with Westpac Banking Corporation, an existing financier of LCI and long-term naming rights sponsor of the helicopter operator.

Richard Jones , General Manager at the Westpac Rescue Helicopter Service, comments: "After many years of planning, we are all extremely happy to receive the first of our new AW139 helicopters for deployment across the region. This first delivery of four helicopters in our contract with LCI is both progress in our story and a boost for our community-based service. The leasing arrangement we have in place with LCI for these AW139 helicopters will enable us to provide the highest level of service and care to the people of New South Wales ."

LCI Executive Chairman Crispin Maunder adds: "LCI is proud to be supporting the brave men and women of Westpac Rescue Helicopter Service who risk their lives to save others in emergency situations. This first delivery is a further step in the transformative upgrade process for the service as it deploys the latest helicopter technology in critical care missions. By the end of this year LCI will lease ten AW139 helicopters for aeromedical operations in Australia which highlights the important role that leasing has in this market."