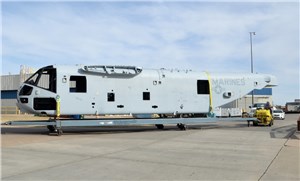 "Spirit AeroSystems is pleased to be a major supplier to a new generation, heavy-lift helicopter capability for the Marine Corps," said Phil Anderson, Spirit senior vice president of Defense Programs. "The strong, lightweight composite structures we are providing to Sikorsky will in turn give the Marine Corps a much needed increase in payload capability."

Sikorsky came under contract to the U.S. Navy in 2013 to assemble and deliver the four SDTA aircraft by 2017 in support of the Marine Corps operational evaluation of the CH-53K platform. Spirit is on contract to deliver to Sikorsky the final SDTA fuselage unit later this year.

The U.S. Navy has included the four SDTA helicopters within the existing $3.5 billion System Development and Demonstration (SDD) contract initially awarded to Sikorsky in April 2006.

From 2011 to 2012 as part of the SDD contract, Spirit successfully delivered to Sikorsky seven fuselage sections from its Wichita, Kan., facility. Sikorsky has applied those fuselage sections to two non-flying test articles, one ground test vehicle, and four flight test aircraft.

The Marine Corps intends to order 200 CH-53K production aircraft (including the four SDTA aircraft), and to stand up eight active duty, one reserve and one training squadron to support the Marine Corps' operational requirements.