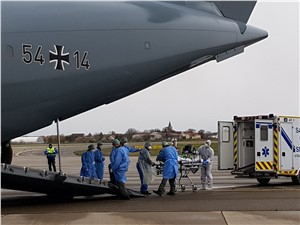 The UK Royal Air Force (RAF) has deployed an A400M on three medical evacuation CCAST (Critical Care Air Support Team) missions so far, transporting patients from the Scottish Islands – where there is an outbreak of COVID-19 and limited health facilities to cope with it – to mainland hospitals for emergency treatment.

Designed for global strategic and tactical air transport as well as humanitarian missions, Airbus’ four-engine, turboprop-powered A400M has the range, speed, operating altitude, and cabin environment to optimally serve the medical evacuation role. For CCAST applications, the aircraft utilises up to three specially-designed frames in the cargo hold to carry critically ill patients – each providing full intensive care capabilities in the air.

This unique configuration, coupled with the aircraft’s ability to fly at near jet speeds and land on very short or unprepared runways, makes it the optimal solution for medical evacuations from the UK’s outlying islands.

"The UK’s National Health Service is crucial in tackling this awful crisis. If mobilising an A400M allows someone quicker access to the NHS and plays a part in saving their life, then all our efforts are rewarded."

The UK’s A400M fleet is backed by Airbus through a long-term global support service contract, with a company team based at RAF Brize Norton air base in Oxfordshire, UK – working hand-in-hand with the RAF to ensure operational availability 365 days a year.

“Flying these missions is of national importance in helping the NHS safeguard the health of every person in the United Kingdom – even in its most remote corners,” explained Ian C., the Maintenance Operations Coordinator. “We anticipate more critical missions in the coming weeks as this crisis progresses, and it is crucial that we deliver 100% mission success.”

The French Air Force also has deployed A400Ms from its fleet for COVID-19-related medical evacuations, with the country’s first-delivered aircraft now transporting patients from congested hospitals within France to areas with greater critical healthcare capacity – complementing the military service’s A330 MRTT, also being used in this role.

The A400M was converted for medical evacuations using a configuration rapidly developed by the French military aeronautical research and test centre (Centre d'Expertise Aérienne Militaire) – applying certain elements of the CM30 medical evacuation module used in the A330 MRTT – and completed in record time.

“The high speed of execution was possible thanks to a study we had carried out in 2018, along with the excellent work and strong commitment from Airbus teams,” said the French Air Force officer in charge. “The trust and proximity we’ve built with Airbus over the years really helped us solve technical questions very quickly.”

The French Air Force began flying the A330 MRTT for COVID-19-related humanitarian flights on 18 March, when its no. 1 aircraft – designated FR01 – transported six patients from EuroAirport Basel-Mulhouse-Freiburg to Marseille-Marignane. Since then, FR01 has performed seven such medevac missions. The military service’s second A330 MRTT, FRO2, also has been converted for use in the fight against COVID-19.

Derived from Airbus’ widebody twin-jet airliner, the A330 MRTT is well-suited for medevac operations, with its large fuselage enabling maximum flexibility for up to 130 NATO stretchers to be carried over intercontinental distances. In a “light medevac” configuration, medical beds can be installed above designated fold-down seats. This allows the aircraft to be used as a troop transport on an outbound relief mission, with medical beds stowed in the lower cargo compartments, and then rapidly converted for medevac on the return.

In an “intensive medevac” configuration – which is being used to transport COVID-19 patients – critical care modules are installed to replicate an intensive care unit in the air.

The presence of Airbus military aircraft in the fight against COVID-19 continues to grow: the German Air Force is utilising A400Ms to transport COVID-19 patients from France to German hospitals in an operation supported by Airbus-built NH90 military helicopters from the French Air Force.

Also in Europe, the Spanish Air Force Medevac Unit (UMAER) has finished adapting an A400M from its fleet to carry out medical evacuation missions – capable of transporting up to five critical patients and as many as 14 for less intensive care. UMAER previously configured an Airbus C295 tactical aircraft for medevac missions.

Further east, the Royal Malaysian Air Force this month deployed its A400M – filled with medical supplies and personal protective equipment (PPE), including nearly three million face masks – to the East Malaysian states of Sabah and Sarawak on the island of Borneo.