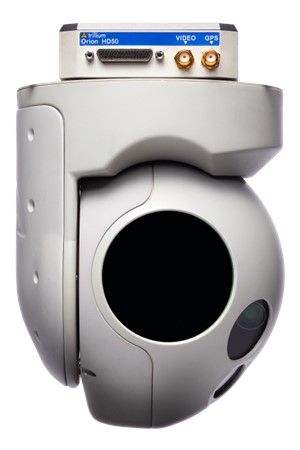 Designed for use on Group 2 and smaller Group 3 UAS, the new HD55 employs electro-optical (EO) and cryogenically cooled mid-wave infrared (MWIR) cameras, as well as an onboard image processor – all in a gimbal just 5.5 inches in diameter and weighing 1750 grams.

“At Trillium, we are constantly on the hunt for state-of-the-art technology,” said Rob Gilchrist, cofounder and president of Trillium Engineering, “and the development of the HD55, the newest addition to our family of gimbaled systems, exemplifies this approach.”

The HD55 replaces the end-of-life HD50, which came in four configurations and was first delivered to customers in November 2014. The HD50-MV was the smallest cooled MWIR gimbaled camera system on the market.

The new and improved HD55 will have the same swept volume as its predecessor but will be slightly lighter and more capable than the trailblazing HD50. “The HD55 has a narrower field of view than the HD50, allowing the new system to get a closer, more actionable look at targets,” Gilchrist said.

Trillium personnel have been flight testing the HD55 on various airborne platforms, including a small multi-rotor drone and a manned Cessna aircraft, which serves as a surrogate for a fixed-wing tactical UAS. The next step, say company officials, is to begin testing on the real thing.

“We are already getting interest from major platform providers,” Gilchrist said.