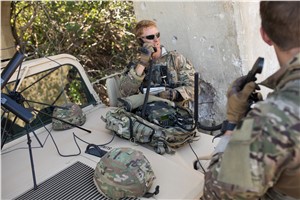 This LRIP will be followed by an Operational Test that will inform a Full Rate Production decision for the AN/PRC-158 and other HMS products. The IDIQ contract includes a five-year base and an additional five-year option with a ceiling of $12.7 billion. The Army expects to purchase approximately 65,000 HMS Manpack radios under the IDIQ.

The software-defined architecture enables flexibility to respond to new and emerging requirements and allows easy porting of new waveforms. The radio is capable of simultaneously handling classified and unclassified data.

“L3Harris is proud to deliver the most critical part of the U.S. Army’s Integrated Tactical Network, enabling secure multi-mission capability in the most challenging and contested environments,” said Dana Mehnert, President, Communication Systems, L3Harris. “The AN/PRC-158 will equip soldiers with cutting-edge waveforms, providing resilient SATCOM and advanced wideband networking at the tactical edge.”