This HC-130J will be operated by the 920th Rescue Wing and 39th Rescue Squadron crews at Patrick Air Force Base, Florida 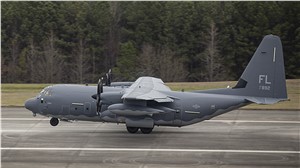 Lockheed Martin (NYSE: LMT) delivered the U.S. Air Force Reserve’s first HC-130J Combat King II today to a crew from the 920th Rescue Wing (RQW) from Patrick Air Force Base, Florida. This HC-130J will be operated by the 39th Rescue Squadron (RQS), which is part of the 920th RQW.

These Reservists are long-time operators of legacy HC-130 P/N Combat King combat search-and-rescue aircraft, flying and maintaining HC-130s since the 1960s — using HC-130s to save more than 3,000 lives. The HC-130J is the sole dedicated fixed-wing personnel recovery platform operated by the Air Force, Air Force Reserve and Air National Guard.

The 920th RQW and 39th RQS also have the distinction of being the Air Force Reserve’s only HC-130J operators and will eventually have an HC-130J fleet to support mission requirements.

Like others in the U.S. Air Force Rescue community, the 920th RQW and the 39th RQS live by the motto, "That Others May Live," which reflects the mission of supporting combat search and rescue anywhere in the world. These crews rely on HC-130s to also extend the range its HH-60 Pave Hawk combat search and rescue helicopters, which were manufactured by Lockheed Martin’s Sikorsky business in Stratford, Connecticut.

“From supporting humanitarian relief efforts on the Florida coast to making combat rescues in Southeast Asia, the 920th’s HC-130s have exemplified the reputation of being tried and true workhorses for 60 years,” said Rod McLean, vice president and general manager, Air Mobility & Maritime Missions at Lockheed Martin. “As we salute one fleet for a lifetime’s worth of work, we are also excited to commemorate a new era with the arrival of the U.S. Air Force Reserve’s first HC-130J Combat King II. This HC-130J provides the Citizen Airmen with increased power, capability and performance to continue to support critical missions close to home and around the world.”

The HC-130J is one of nine production variants of the C-130J Super Hercules, the current production model of the legendary C-130 Hercules aircraft. With more than 450 aircraft delivered, the C-130J is the airlifter of choice for 20 nations. The global Super Hercules fleet has more than 2 million flight hours of experience supporting almost any mission requirement — any time, any place.