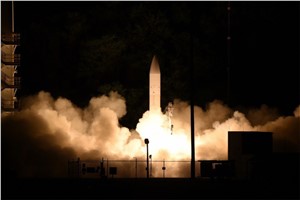 A flight test of the joint Army-Navy hypersonic glide vehicle across the Pacific Ocean was a success, thanks to a dedicated team who managed complexity and change, officials said.

"We had a great team executing this," Lt. Gen. L. Neil Thurgood said of the March 19 test. Thurgood, the Army's director of hypersonics, directed energy, space and rapid acquisition, thanked the joint team for their "phenomenal job" in a March 23 interview.

Flight tests are highly complex endeavors, officials said. For this test, personnel began traveling to the site weeks in advance to get everything in place — from assembling the missile and putting monitoring equipment in place to running safety drills and developing detailed countdown procedures.

A large number of the support personnel in Kauai had worked on hypersonic technologies for years and applied their previous flight test experiences to this event.

This time, there were some differences from usual flight test operations, though. Some travel restrictions were put in place in the final days leading up to the test in response to COVID-19, according to Joel Shady, flight test director. "With the COVID virus, there were activities that didn't go according to the way we had initially planned out," he said.

Some of the tasks had to be accomplished through video teleconferences and phone calls, Shady said. "That made it very challenging," he said, "but it's very rewarding when, after everything was said and done, we did everything we were supposed to do."

Shady, who works for the Army Space and Missile Defense Command at Redstone Arsenal, Alabama, had spent about 40 days on Kauai preparing for the flight test.

"It was tough being away from family, knowing a certain amount of crazy was going on in the world and you're not there to help them," he said.

As flight director, his job was to "choreograph" the entire operation, he said, overseeing everything from environmental compliance to safety and launch procedures.

"We take the program's objectives, turn those into measurable requirements, and then assign all the test resources that are going to ensure we collect the information," he said.

The rapport among all the team members was outstanding, he said, with team members from Navy, Army and industry partners working well together.

The common hypersonic glide body will be used by both the Navy and the Army, so the two services continue to work closely every step of the way. The Navy is the lead service for the design of the weapon system, and the Army will lead production.

About 60 percent of the military members at the Kauai test facility worked for the Navy, Shady said. In addition, naval vessels were deployed across the Pacific to observe the trajectory of the hypersonic glide vehicle, said Navy Capt. John Lowery, program manager, Conventional Prompt Strike, U.S. Navy Strategic Systems Programs.

Dr. Sidney Beck, chief engineer of the Naval Ordnance Test Unit, was the overall mission director in charge of the test. He was at Kauai and oversaw the assembly, integration, testing and countdown of the missile that carried the payload downrange.

Both Beck and Lowery said the common hypersonic glide body in last week's test will be upgraded for the next hypersonic test.

A new booster, currently being developed by the Navy, will be demonstrated within future tests, as well, they said.

"We're building at stages and maturing the design," Lowery said. "So, this was a natural step in the progression of this technology, regardless of whether you were launching this off an Army vehicle or a submarine."

The common hypersonic glide body is actually government-owned technology produced over the years, Thurgood pointed out.

"Lots of government agencies had a hand in developing this technology," he stressed.

The common hypersonic glide body for later tests and fielded prototypes, however, will be built by Dynetics in Huntsville, Alabama, Thurgood said.

Dynetics was awarded a competitive contract to become the first industry producer of the hypersonic glide vehicle, he said.

"The [science and technology] community that developed this technology is now … transitioning to industry so that we can build these at a much higher rate and a much faster speed," Thurgood explained.

"It's pretty unique that, as we build the weapons system, we're also building an industrial base to go along with it," he said.

"The data we collect goes to what modifications we make to the system, and it also helps [the Missile Defense Agency] as they inform their development of the capabilities for the defense of hypersonic weapons," Thurgood said.

He explained that agency employees attended the test to collect information on how enemy hypersonic weapons might be stopped.

"We try not to leave any stone unturned in terms of sharing data across the community," Thurgood said, "because missile test data can be used for lots of outcomes."

The Army plans to field a long-range hypersonic battery in 2023, he said. The unit will use M983 prime-mover trucks and revamped M870 trailers to haul the hypersonic glide vehicles from one launch site to another.

The strategy is to reuse as much as possible, he said. "That way we reduce our logistics burden, reduce our training burden and we actually use the equipment our soldiers are familiar with."