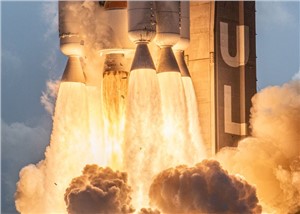 The RL10, which powers the ULA Atlas V Centaur upper stage, is one of several Aerojet Rocketdyne propulsion products supporting the mission. Aerojet Rocketdyne propulsion can be found on both the rocket and the AEHF-6 satellite. Built by Lockheed Martin, the AEHF satellites provide secure, jam-proof communications, including nuclear command and control, to U.S. and allied forces.

“This launch marks an important milestone for Aerojet Rocketdyne and for the country,” said Eileen Drake, Aerojet Rocketdyne’s CEO and president. “The RL10 has supported a majority of the nation’s most important national security and scientific missions, including all of the AEHF satellites which provide communication links that are critical to our warfighters.”

The Atlas V in the 551 configuration is the most powerful vehicle in the Atlas V family, featuring five Aerojet Rocketdyne AJ-60A solid rocket strap-on motors, each generating 348,500 pounds of thrust. Designed specifically to provide extra lifting power to the Atlas V, the AJ-60A is the world’s largest monolithic solid rocket motor ever flown.

The Atlas V also uses Aerojet Rocketdyne reaction control thrusters on the Centaur upper stage, as well as pressure vessels provided by ARDÉ, an Aerojet Rocketdyne subsidiary. The rocket launched from Cape Canaveral Air Force Station, Florida, and the AEHF-6 satellite is on its way to its operating location in geostationary orbit.

In addition to the Atlas V, the RL10 also powers the upper stage of ULA’s Delta IV Heavy rocket. The RL10 has helped place hundreds of military, civil and commercial satellites into Earth orbit and has sent spacecraft to explore every planet in our solar system. The RL10’s proven reliability over more than five decades of service has made it the upper-stage engine of choice for three new rockets under development, including ULA’s Vulcan Centaur, Northrop Grumman’s OmegA, and NASA’s Space Launch System.