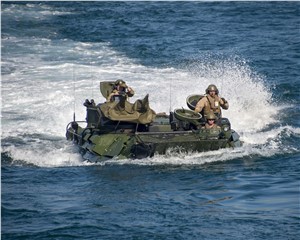 “Controlling stations, such as well deck control, is essential for the success of any wet well operation, as they drive the operations and are a key component to communications,” said Boatswain’s Mate 1st Class Michael Sacco, well deck control officer. “The tireless efforts of combat information center, combat cargo and deck department led to Iwo Jima’s recommendation for AMW certifications.”

Sailors and Marines can use this joint environment to effectively and efficiently collaborate and carry out the Navy and Marine Corps mission.

“Operations like these solidify the partnership that is needed to conduct successful ship to shore operations which is the overall mission of amphibious crafts in the Navy and Marine Corps as a whole,” said Marine 1st Lt. Hamilton Jones, executive officer of 2nd Amphibian Assault Battalion Company A, 2nd Platoon and Headquarters Platoon. “Doing exercises like this allow Marines to reintegrate with our naval roots. We often forget where we came from. It’s imperative that the blue and green side are able to communicate effectively, particularly, when it comes to navigation.”

Iwo Jima will continue to certify her capabilities for the next scheduled deployment.