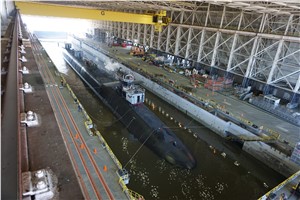 Naval Facilities Engineering Command (NAVFAC) Southeast awarded a $191.9 million fixed-price award-fee contract March 20 to Alberici-Mortenson, Joint Venture out of St. Louis, Missouri. The first phase of the Design-Bid-Build contract is for the recapitalization of the dry dock at Naval Submarine Base (NSB) Kings Bay, Georgia.

“The overhaul and restoration of the Kings Bay Dry Dock is the most important strategic deterrence enterprise modernization effort outside of the construction of the new COLUMBIA-class SSBN, a nuclear-powered ballistic missile submarine,” said TRIDENT Refit Facility Commanding Officer Capt. Paul Dinius.

The Navy’s submarines serve as the nation’s sea-based deterrent strategies. The Dry Dock Recapitalization Project at NSB Kings Bay is in direct support of the future of Submarine Warfare. The new COLUMBIA-class submarine is replacing the OHIO-class submarine.

“There have been several dedicated teams brought to bear for this effort,’ said NAVFAC Southeast Deputy Construction Management Officer Travis Baker. “So many have worked tirelessly to ensure the project would be ready for award and of high quality.”

Dinius explained, “This will be the hardest single effort executed in this region since the construction of the Dry Dock more than 30-years ago, but I’m confident that Team Kings Bay is ready for the challenge.”

The work to be performed includes concrete and steel repairs, overhaul and repair of the steel caisson and upgrades to power distribution, chilled water and fire detection and alarm systems. The entire superstructure will be re-coated, along with replacement of the roof, wall panels, and other plumbing and piping. The control system, electronic components and the auxiliary seawater system will also be upgraded.

“The window of opportunity to perform the majority of the work is limited,” said Baker. “The sheer magnitude of the work to be accomplished combined with the limited time to accomplish everything is almost overwhelming.”

In order to meet this tight deadline, NAVFAC Southeast has established a Construction Management Office (CMO) on site at NSB Kings Bay with dedicated resources capable of supporting 24 hour a day activities.

“We have been successful in pulling several dedicated teams together to prepare for this effort,” said Baker. “Our team has worked tirelessly to ensure the project would be ready for award and be of high quality.”

Baker explained that this is the most significant project he has ever seen in his career both in terms of importance and scale. “The amount of senior level leadership and supported command focus and support has been unparalleled.”

The contract also contains unexercised options, which if exercised, would increase the cumulative contract value to $592.3 million.

The work is expected to be complete by July 2023.