Winning in the Digital Battlespace

The future battlespace environment will be highly contested and congested. 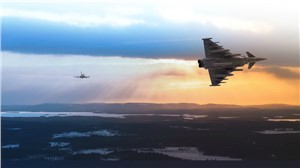 "There’s a real need to move away from one-dimensional generation labelling and talk about future capabilities"
Raffael Klaschka, Head of Strategic Marketing at Eurofighter GmbH.

Growing Hostility
The threats we face are constantly evolving and become increasingly deadly. And, as we look into the future, they will achieve an even greater level of connectivity. We face challenges like adversary SAM sites being connected, providing a protective shield that means it’s almost impossible to get to a high value target. Threats are also evolving in numbers terms or combat mass.

In short, it will be much harder to operate in this ‘contested’ environment. We need to stay ahead and to do so we need to be innovative and bring in new capability areas like digital stealth, to ensure we provide the capability our air forces need.

Today, our adversaries have the latest-generation fighters, unmanned air vehicles and complex ground-to-air threats. But by far the most significant change is that they are now networking.

Traditionally, we were able to fly against threats who didn’t necessarily co-ordinate their actions effectively. Today we may see ground and air threats but won’t necessarily know who is guiding the missile. Why? Well, because they are networked, they can effectively hand-off control of the missile.

In this new world, countering a particular threat will no longer be the most important thing. It’s about countering the potential behaviour and the networking of the joint threats and bringing intelligent countermeasures against networked multiple threats. These highly proliferated, long-range surface-to-air missile systems have the ability to link with other systems. The question now isn’t ‘How do I counter that threat?’, but ‘How do I counter its network?’

Tackling Future Threats
When you’re up against a networked adversary you’ve got to consider how the network is behaving. You’ve got to have intelligence about the threat’s behaviour and tactics. You’ve also got to have an Electronic Warfare (EW) system which is able to carry out threat linking and coordinate complex countermeasures.

It comes down to understanding the threat picture.

That’s about gathering information and analysing behaviour, before turning that data into intelligence and ultimately into mission data and effective countermeasures. That’s the critical loop, gathering data, analysing it, understanding it, and then programming it into your highly adaptable, EW system so you can react effectively.

Here it’s important to understand that, unlike other aircraft, Eurofighter is not black boxed. This is a critical factor in tackling these future threats and it’s one that often gets overlooked. But the point is, you only get the effective use of your kit if you’re able to fine tune it exactly to your specifications and requirements.
Of course, in this new digital environment you need to be able to adapt within hours. A threat’s tactics and the way it’s interacting with others needs to be seen and understood quickly. That means looking out for different sets of behaviours, recording them, returning to ground and analysing them. With Eurofighter you can do all this and then update the mission data, giving forces sovereign capability. It is hard to overstate how critical it is to get back in the air within hours with an up-to-date mission data set that’s reflective of that new behaviour and those new tactics.

The most advanced operational EW capability available
Eurofighter’s operational capability is the most advanced because it combines incredibly effective tools, processes, data and technology together to actually create a very powerful up-to-date relevant mission data set. The key word is ‘operational’ because this isn’t about technology and hardware alone, it’s about the powerful combination of knowledge, process, people, data and technology. But, importantly, it also benefits from having 1000s of combat hours from different operators and this knowledge is invaluable. This is what is being used to further enhance its EW capability. The speed at which the aircraft can be fine-tuned and adapted so that the mission data set is always the one that’s required is unrivalled.

There are three elements that back up the claim that Eurofighter is the most advanced operational EW capability. First ,Eurofighter Typhoon doesn’t stand still — there’s continuous spiral development; second there’s a powerful relationship between industry and end-users as part of that spiral and a continuous feedback loop. Here, we’re benefiting from all the customers and their respective experiences. And finally, Typhoon’s ability through the work that has been done by the different industry partners to truly join up the data, process, people and technology together.

Winning the Electro-Magnetic Battle
We are now in an Information and Digital Warfare Age and to maintain a capability edge you need a platform that can manage information and data and stay up-to-date. EW is a key part of that. But it’s not the only part. With the LTE programme there’s a lot of other things happening with Eurofighter, but EW plays a key part in staying relevant in that information digital warfare age.

In years gone by the range of a threat was simply not great enough to stop a fighter jet getting close enough to launch its missiles and achieve its mission. However, it has reached a point where our forces can no longer rely upon the range of their missiles alone. They have to get closer, but getting closer means getting within a potential missile engagement zone. To do that you have to win the electro-magnetic battle first and this is only won with effective EW systems.

In this new world EW is becoming more of an offensive capability. Without trying to jam, suppress or proactively confuse threats, you’re not likely to get anywhere close to achieving your mission.
In fact, EW is starting to be seen as an extension of Eurofighter’s offensive capabilities. This is evident in the SPEAR-EW programme, which integrates the SPEAR system with cutting edge miniaturised EW payload technology. This gives a Suppression of Enemy Air Defence (SEAD) capability in addition to its current jamming capability. Eurofighter’s EW capabilities are continuously enhanced to stay ahead of the threat, which is where BriteCloud comes in. BriteCloud gives another layer of protection and jamming capability.

In the future if you’re not able to cope with the demands of this digital arena, then you are out. That’s why EW capability will be so critical in terms of keeping you relevant in the future battlespace.

Future Battlespace Thinking
The critical thing about the future battlespace is that it’s no longer about single threat engagements, it’s a joint battlespace with joint threat environment engagements. Here, the ability to coordinate the data, understand it, share it and make sure the picture is accurate so that you can update the requisite mission data on each relevant platform speedily is probably the greatest challenge.

Systems are being developed that exploit greater parts of the EM spectrum. Other advances will include programming the system’s ability to learn by employing machine learning techniques and artificial intelligence to understand data. Then there are techniques to ensure data is shared quickly across systems and platforms.

One key area being looked at is trying to make sure mission data is turned around even quicker than it is. We already have examples of it being done in hours. However, as the threat data and recording capability of aircraft grows, the information is measured in terabytes so we need to reduce the burden on people to update mission data. This is leading to work on new ways to improve the analysis of data. This includes improving the ability for mission data to identify and self-learn if a threat has changed its behaviour and recognise that it needs to update itself.

Automating data analysis and mission data programming, using machine learning, is a really important challenge. This forms part of the Long Term Evolution of Eurofighter. It’s also about allowing an asset like Eurofighter to share its situational awareness picture with other aircraft. Sharing intelligence — like threat identification and location — will build multi-platform mission data. Of course, speed is of the essence. Adversaries are going to be far less bothered about verifying new techniques and gaining iterative confidence. Instead, they will try things out to disrupt our thinking, disrupt our tactics, and disrupt our countermeasures.

Therefore, we can’t go through a very slow process of trying to build confidence, we need the ability to stay up to date. That’s where the close working relationship between industry and end-user nations comes in. We’re looking at rapid capability insertion because we recognise we have to continue to develop faster processes to ensure we stay ahead of the game.

Tell a friend:
Winning in the Digital Battlespace