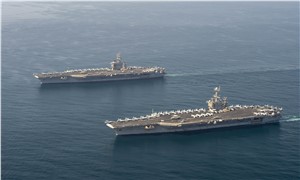 The dual carrier operations integrated with B-52s represent the current combined joint capability and interoperability to plan and conduct multi-task force operations in the U.S. Central Command area of responsibility. With the inherent maneuverability and the combined strike power of two aircraft carriers, the United States remains committed to the security and stability in the region, and is prepared to protect and defend our forces and partners, as needed.

“While we continue to take active steps to prevent and mitigate the effects of the COVID-19 across the Middle East, Naval Forces operating in the region have suffered no impacts to readiness. We remain ready and focused to respond forcefully and decisively to any aggression,” said Vice Adm. Jim Malloy, Commander of U.S. Naval Forces Central Command. “Our two carrier strike groups have been laser-focused on readiness to defeat any threats to security in the region; planning and training specifically against potential threats since June of 2019. While we do not and will not seek conflict at sea, we have never been better postured and more thoroughly prepared to response to it with overwhelming force.”

The seamless integration of naval and air commands builds a common tactical picture linking dozens of ships and aircraft to ensure the freedom of navigation and free flow of commerce, as well as provide the combatant commander significant striking power for contingency operations.

Malloy said, “We will continue to synchronize air operations, strike and combat-training with the Air Component Commander and the robust forces he now has at his disposal – as steel sharpens steel.”