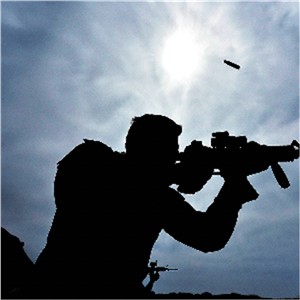 The military small arms market are an inevitable part of any Defense and Homeland Security forces across the world. The importance of small arms have been witnessed through the World Wars, Vietnam Conflict and the most recent Afghanistan and Iraqi operations. The role and the material science of small arms market have evolved over the past few decades. The maturation of this segment has also resulted in the increased efficiency of three key indicators, namely the lethality, range and accuracy.

The revenue restraint in this sector is the illegal arms, this is also one of the facilitators of easy access to arms and thereby related events. Illegal arms account to both the crude production of arms using bicycle frames or any other commercially available structures and unaccounted arms. In 2007, GAO revealed that around 110,000 Kalashnikov rifles and around 80,000 pistols bought by US forces for Iraqi security forces could not be accounted. Such incident cumulate to form the larger illegal arms market.

The military small arms market is not an independent entity, the complementing markets are the ammunition and the material sciences market. The need to neutralize a distant target by using minimal ammunition are the key drivers of measurement of efficiency. The increased focus on weight reduction through Soldier Modernization programs have also promoted the use of advanced alternative material. These modernization programs are focused on integrating the small arms equipment into the Next Generation Soldier Systems.

The legal import and export transactions of the top ten countries surpassed 25 Million units during the period 2006- 2018. This market was dominated by the revolvers and pistols segment followed by rifles and carbines segment. US, Italy and UK were the most active countries in the above-mentioned segment and time frame. It is also interesting to note that the cumulative share of imports was 3X higher to the cumulative exports in this segment.

The report titled “Global Military Small Arms - Market and Technology Forecast to 2028” is segmented by Region, End users, By Type, and By Operation. The Regional Segments are North America, Europe, APAC, Middle East and ROW. The End User market is sub segmented as Defense and Homeland Security. The market is segmented by Operations as Manual, Semi- Automatic and Automatic. Six types of arms have been considered for this study they are Assault Rifles, Light Machine Guns, Rifles & Carbines, Sub Machine Guns, Revolvers & Pistols and Others.